Police have used tear gas to stop protesters from approaching a football stadium during a Brazil-Uruguay Confederations Cup match.

About 50,000 protesters marched to the stadium in Belo Horizonte.

A small number of them tried to push past police lines. About 20 people were detained.

The crowds repeated the demands they have made since the protests began – more spending on education and health, and a crackdown on corruption.

They also complained about the high cost of the 2014 World Cup, for which the Confederations Cup is a dress rehearsal. 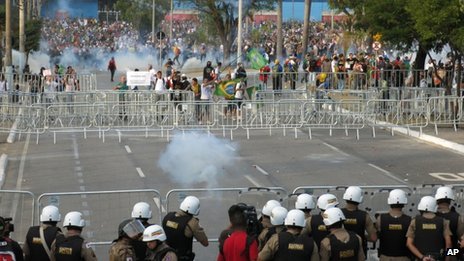 The match has now finished; Brazil beat Uruguay 2-1, and qualified for the final of the tournament.

Since the demonstrations escalated last week, President Dilma Rousseff has introduced a series of measures to answer some of those demands.

In the capital, Brasilia, campaigners against social inequality have placed 594 footballs in front of the parliament building to show that the “ball is in the court of the Congress to pass the reforms demanded by those on the streets”.

A key grievance of protesters was a proposed constitutional amendment, PEC 37, which would have limited the power of federal prosecutors to investigate crimes – which demonstrators claim could have opened the way for more corruption.

But on Tuesday, the proposed measure was defeated by 430 votes to nine.

Congress also voted to use all the royalties from newly discovered oil fields for education and health.

Some of the largest oil finds in recent years have been discovered off the Brazilian coast, and the country is expected to be able to produce tens of billions of barrels of crude oil over the coming decades.

In another attempt to pacify protesters, the government promised to speed up the pace of reform.

It said it would simplify a referendum to establish a constituent assembly – proposed on Monday by President Dilma Rousseff – to allow for a vote as early as 7 September.

The president of the Senate, Renan Calheiros, has proposed free transport for all students.

The rising cost of public transport was the main catalyst for the protests, and various city authorities have already decided to reverse fare increases.