Prince Jackson, 16, took to the stand for the first time in the Jackson family’s wrongful death lawsuit against AEG in Los Angeles on Wednesday.

Prince Jackson is a witness in a lawsuit claiming AEG negligently hired Conrad Murray, the doctor who was later convicted of involuntary manslaughter for giving Michael Jackson an overdose of the anesthetic propofol.

According to TMZ, Prince Jackson was in the lounge room of the family’s Holmby Hills mansion when his father went into cardiac arrest on June 25, 2009.

He recalled hearing screams and Conrad Murray called him upstairs. Prince Jackson said his father was “half hanging out of the bed” while the doctor was trying to resuscitate him.

Prince Jackson said his sister Paris, 15, who is being treated following a suicide attempt earlier this month, suffered the most in the wake of their father’s death.

He recalled she screamed that she “wanted her daddy” while Conrad Murray was performing CPR.

Prince Jackson said: “She was my dad’s princess. She definitely is dealing with [his death] in her own way.”

He also revealed his father was excited about going back on tour before his death but wasn’t happy about the terms of the ill-fated shows.

Prince Jackson told jurors his father wanted more time to rehearse and had several tense phone conversations with promoters of his This Is It shows that sometimes ended with his father in tears.

The teen said his father remarked after one of the conversations: “They’re going to kill me,” but he did not elaborate. 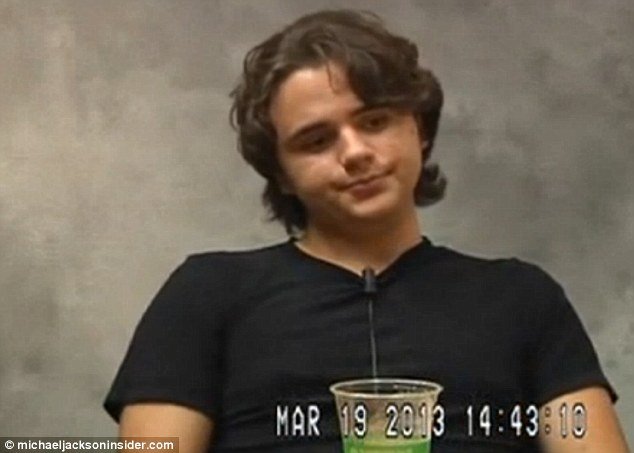 Michael Jackson wasn’t at home at the time and was probably at rehearsals, Prince said.

For the first time, the teenage publicly provided details about the day his father died. Prince Jackson testified that he saw Conrad Murray performing CPR on his father, who was hanging halfway off a bed.

It appeared his father’s eyes were rolled up in the back of his head, Prince Jackson told jurors.

Prince Jackson’s eyes appeared red as he recalled being told by Conrad Murray at a hospital that his father was dead.

He described growing up on Neverland Ranch and showed the panel videos of the property’s petting zoos and other amenities. After his father’s acquittal of child molestation charges, Prince Jackson described living in the Middle East, Ireland and Las Vegas.

Prince Jackson told the jury that his father was always working, but his children had no idea he was a global superstar.

“We always listened to his music, but we never knew how famous he was,” he said.

Prince Jackson said he and his sister Paris watched a video of one of their father’s performances and got a sense of his fame when overwhelmed fans were carried from his shows on stretchers.

He is the first Jackson family member to testify during the trial, now in its ninth week. Attorneys have said TJ Jackson, who serves a co-guardian to Prince and his siblings, and Taj Jackson, are also expected to take the witness stand. They are the sons of Tito Jackson.

Prince Jackson, his sister Paris and brother Blanket are plaintiffs in the case against AEG, which their grandmother and primary caretaker filed in August 2010.

In court, Prince Jackson wore a black suit with a dark grey tie with his long brown hair tucked behind his ears. He spoke softly as he began testifying, and the first exhibit shown to jurors was a photo taken with their grandmother on his and Paris’ first day of school.

He described his school life, including taking a summer course in U.S. history, participating on the school’s robotics team and volunteer work.

Another image shown to jurors was Michael Jackson playing piano with his son while Prince was still an infant or toddler.

Plaintiffs’ attorney Brian Panish asked Prince Jackson whether he was interested in pursuing a career in music.

“I can never play an instrument and I definitely cannot sing,” Prince Jackson said to laughter from the jury.

He said he wanted to study film or business when he goes to college.

Prince Jackson said he helped attorneys pick out the videos and photos shown in court.

Michael Jackson sheltered his children from the public eye while he was alive, often obscuring their faces while out in public. The children have been more public in recent years, appearing at a star-studded memorial service and other events honoring their father.

Paris Jackson, 15, had also been expected to testify during the case but was hospitalized last month and her status as a witness remained unclear. Attorneys for AEG played a snippet of her videotaped deposition last week, and more of her testimony may be played for the jury later in the trial.

Blanket Jackson, 11, is not expected to testify.

The jury of six men and six women has learned numerous details about Michael Jackson’s role as a father during the case. They’ve heard about a secret trip to a movie weeks before Michael Jackson’s death, a private circus he hired for Paris’ 11th birthday, and Blanket’s interest in his father’s dance rehearsals.