James Gandolfini’s private viewing is underway in Westwood, a small northern New Jersey town near where the actor grew up.

Mourners began arriving late on Wednesday afternoon at an invitation-only wake for family and friends at the Robert Spearing Funeral Home in Park Ridge, near Westwood where the 51-year-old grew up.

Meanwhile, Broadway theatres in New York City dimmed their marquee lights on Wednesday night in memory of the late Sopranos star, who earned a Tony Award nomination in 2009 for his role in the award-winning God of Carnage.

James Gandolfini died suddenly last week from a heart attack while on holiday with his family in Italy.

Both James Gandolfini’s widow Deborah Lin and his ex-wife Marcy Wudarski were among the mourners at Wednesday’s wake.

His funeral will be held Thursday at the Cathedral Church of Saint John the Divine in New York City. 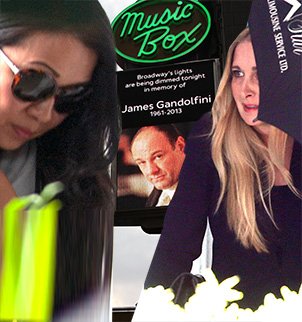 James Gandolfini and Marcy Wudarski divorced in December 2002, and their 13-year-old son Michael allegedly found his father’s body after having a massive heart attack in hotel bathroom in Rome.

They baby daughter Liliana Ruth Gandolfini, was born in October 2012 in Los Angeles.

A top Searchlight executive introducing Animal Rescue tells international theater owners, “we are all very deeply saddened and feel very honored to have worked with him”.

Animal Rescue is the last film James Gandolfoni shot before his death on June 19 in Italy.

James Gandolfini, who plays a bar owner in the crime drama, stars with Tom Hardy and Noomi Repace.