Australia’s PM Julia Gillard has been ousted by Kevin Rudd as leader of Labor Party.

Kevin Rudd won by 57 votes to 45, in a leadership ballot of Labor lawmakers.

The change comes ahead of a general election due in September, which polls suggest Labor is set to lose.

This is the latest twist in a long and bitter rivalry between Julia Gillard and Kevin Rudd – but it could be the last as the prime minister has said she will now leave politics.

“I will not re-contest the federal electorate… at the forthcoming election,” said Julia Gillard, Australia’s first female prime minister.

Despite their bitter rivalry, Kevin Rudd praised his predecessor, describing her as a woman of extraordinary intelligence, with great strength and energy.

“Julia, as prime minister and prior to that as deputy prime minister, has achieved much under the difficult circumstances of a minority government,” Kevin Rudd told a news conference after his victory. 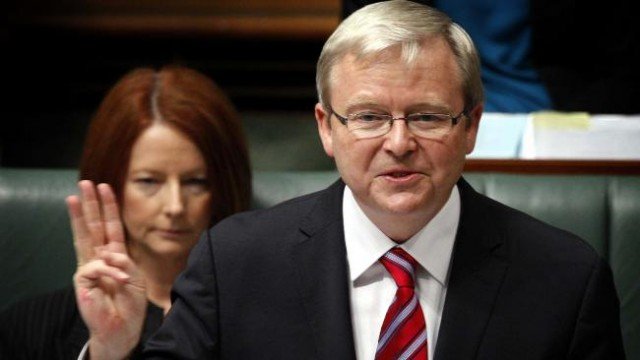 Kevin Rudd is more popular with voters than Julia Gillard, and many believe Labor will perform better in the election under him.

Wednesday’s leadership test was the third faced by Julia Gillard since she took office in 2010. She herself ousted Kevin Rudd as prime minister in 2010.

Kevin Rudd has exacted his revenge, after three years of him and his supporters mounting a destabilization campaign targeted very much at her.

The ballot followed months of speculation over the party’s leadership, and came after a day of drama that saw Kevin Rudd’s supporters push for a vote.

Shortly before the vote, a key power-broker, Bill Shorten, switched his support to Kevin Rudd, saying Labor stood a better chance in the polls with him.

Many people do not think Kevin Rudd will win the election but he may mitigate the losses and shorten the time Labor could spend in opposition if the party loses.

A poll published earlier this month suggested that three cabinet ministers would lose their seats at the poll under Julia Gillard’s leadership, but would retain their seats if Kevin Rudd was leading the party.

The vote makes Kevin Rudd the leader of the Labor Party, but not prime minister.

Julia Gillard must write to Governor General Quentin Bryce stating that she is resigning as prime minister before Kevin Rudd can be sworn in.

A shake-up in the cabinet is expected following the leadership change.

Deputy PM Wayne Swan has already quit because of Kevin Rudd’s victory. He has been replaced by Kevin Rudd ally and transport minister Anthony Albanese.