Paula Deen appeared on the Today show this morning in a last-ditch attempt to save her career in the wake of her racism scandal.

Disgraced chef Paula Deen sobbed as she claimed “very hurtful lies” had destroyed her reputation and insisted that she had only used the n-word once – something she deeply regretted.

Paula Deen added that she believed she should not have been dropped as a representative for Food Network and Smithfield and that other partners “who know who I am” have stood beside her.

“The main reason I am here today is that it’s important to me that I tell you and everyone out there what I believe and how I live my life,” Paula Dee began.

“I believe that every creature on this earth was created equal.

“I want people to know who I am and people that have worked beside me know what kind of person I am. I am so distressed that people I’ve never heard of are suddenly experts on who I am.

“What you see is what you get. I’m not an actress. I’m heartbroken. I’ve had to hold friends in my arms as they’ve sobbed because they know what’s been sobbed about me that’s not true.”

She said that she had used a racist slur on one occasion in a stressful robbery situation, but said that “it was a world ago” and something she regretted.

“If there’s anyone out there that has never said something that they wish they could take back, please pick up a rock and throw it so hard at my head that it kills me,” Paula Deen sobbed.

Paula Deen admitted to using the n-word in a deposition that was released last week. On the Today show she said that, even knowing the upset is has caused her career, she would admit the truth if given the choice again.

“There’s a couple of kinds of people that I don’t like – that I am prejudiced against – and that’s thiefs and liars,” she said. 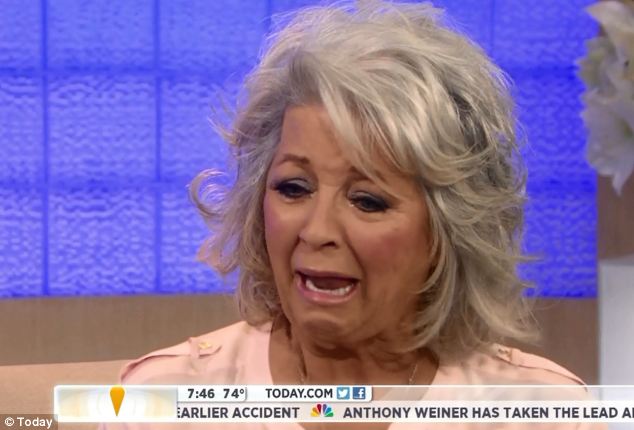 Paula Deen appeared on the Today show less than a week after she cancelled an interview amid the scandal over her use of racial slurs.

Following her dismissal from the Food Network, meat producer Smithfield announced at the weekend that they will be dropping Paula Deen as their company spokeswoman and will be ending their partnership. The company also sells a line of Paula Deen-branded hams.

The company released a statement saying it “condemns the use of offensive and discriminatory language and behavior of any kind. Therefore, we are terminating our partnership with Paula Deen”.

Another blow came when it was announced over the weekend that she will not be appearing on home shopping network QVC as litigation continues in the discrimination lawsuit.

Paula Deen, 66, became embroiled in the racial controversy when a former employee testified that she heard Deen repeatedly use the n-word and talk of how she wanted to have a plantation themed wedding for her brother with an all-black serving staff to emulate slaves.

After the testimony was released publicly, both Paula Deen and her career have spiraled out of control in a public relations nightmare.

First she released a heavily-edited video on Friday where she spoke directly to her fans, asking for their forgiveness.

Paula Deen was due to follow that up with an appearance on the Today show that same morning, but cancelled at the last minute leaving co-anchor Matt Lauer to explain on air.

After the initial video was released another, longer one was then posted on YouTube and was taken down soon after.

In this one she explains her absence from the Today show and apologizes “to those that I have hurt”.

Paula Deen says: “I was invited to speak to Matt Lauer about a subject that has been very hurtful for a lot of people.

“Matt I was physically not able this morning, the pain has been tremendous that I have caused to myself and to others so I am taking this opportunity, now that i have pulled myself together and am able to speak, to offer an apology for those I’ve hurt.”

Over the weekend, her loyal fans showed their support by lining up in droves to eat at her Savannah, Georgia restaurant, and bash the Food Network on social media.

“Everyone in this nation has used a racist comment at one time or another. She grew up in the South,” Facebook user Maria O’Donnell wrote on the channel’s page.

Over the weekend, more stories about the chef’s alleged racism as a former employee alleged that Paula Deen and her brother regularly called him “my little monkey”.

Another told how as an oyster cook at one of her restaurants the black wait staff were regularly forced to work at her private parties held at her Savannah, Georgia estate without pay.

“Paula and Bubba just gave us beer and alcohol and I don’t even drink. It was insulting and unfair. I was like, <<Pay me!>>,” Sheldon J. Ervin told Radar.

While the Network cut ties to the chef, who headlined three shows on the channel that she has worked with for the past 11 years, QVC has waited to make any final moves.

“QVC shares the concerns being raised around the unfortunate Paula Deen situation. QVC does not tolerate discriminatory behavior,” vice president Paul Capelli said in a statement.

“We are closely monitoring these events and the ongoing litigation. We are reviewing our business relationship with Ms Deen, and in the meantime, we have no immediate plans to have her appear on QVC.”