Secretary of State John Kerry has said US would be “disappointing” if Russia and China had helped fugitive Edward Snowden evade US attempts to extradite him from Hong Kong.

Speaking during a visit to India, John Kerry said there would inevitably be “consequences” to such a move.

Edward Snowden flew from Hong Kong to Moscow on Sunday.

A seat was booked in his name on a flight to Cuba on Monday morning, but he is not thought to have boarded.

Edward Snowden has applied to Ecuador for political asylum, but the country’s foreign minister has implied he is still in Russia.

And speaking at a news briefing later on Monday, White House spokesman Jay Carney said: “It is our understanding that he [Edward Snowden] is still in Russia.”

He added that senior US officials were briefing President Barack Obama regularly about all the developments.

Edward Snowden, 30, is wanted by the US for revealing to the media details of a secret government surveillance programme, which he obtained while working as an IT contractor for the National Security Agency (NSA).

Speaking during a visit to Delhi in India, John Kerry told reporters it would “be obviously disappointing if he was willfully allowed to board an airplane”.

“As a result there would be without any question some effect and impact on the relationship and consequences.”

Edward Snowden is believed to have spent the night in an airside hotel at Moscow’s Sheremetyevo airport. The US has revoked his passport and wants Russia to hand him over.

John Kerry urged Moscow to “live by the standards of the law because that’s in the interests of everybody”. 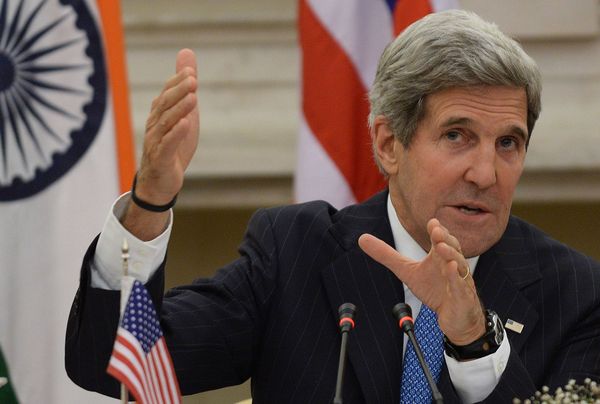 “In the last two years we have transferred seven prisoners to Russia that they wanted so I think reciprocity and the enforcement of the law is pretty important,” he said.

The decision not to “provisionally arrest” Edward Snowden in Hong Kong “unquestionably has a negative impact on the US-China relationship”, he said.

He added that senior US officials were briefing President Barack Obama regularly about all the developments, and called on Russia to use all options to expel the former US spy agency contractor.

Meanwhile, Russia’s Interfax state news agency quoted an informed source as saying Moscow was considering a US extradition request, but that Edward Snowden had not officially crossed the Russian border so could not be detained.

Edward Snowden was in hiding in Hong Kong when his leaks were first published.

During a visit to Vietnam on earlier Monday, Ecuador’s Foreign Minister Ricardo Patino read out a letter Edward Snowden had sent to request asylum, in which he said he was “at risk of being persecuted by the US and its agents”.

Ricardo Patino confirmed that his country was processing an asylum request from Edward Snowden.

When asked whether he knew of Edward Snowden’s current location he declined to answer.

“We will consider the position of the US government and we will take a decision in due course,” he said, saying Ecuador put the protection of human rights “above any other interest”.

The US and Ecuador have a joint extradition treaty, but it is not applicable to “crimes or offences of a political character”.

Edward Snowden is being supported by the whistleblowing website WikiLeaks, which said on Sunday that he was heading to Ecuador accompanied by some of its diplomats and legal advisers.

Ecuador is already giving political asylum at its London embassy to WikiLeaks founder Julian Assange – which he denies.

On Monday, Julian Assange said Edward Snowden was “healthy and safe”, and travelling to Ecuador “via a safe path through Russia and other states”.

He said Edward Snowden had left Hong Kong on a refugee document of passage issued by Ecuador, and was not carrying any NSA secrets with him.

Edward Snowden’s leaks have led to revelations that the US is systematically seizing vast amounts of phone and web data under an NSA programme known as PRISM.

He earlier said he had decided to speak out after observing “a continuing litany of lies” from senior officials to Congress.

They say PRISM cannot be used to intentionally target any Americans or anyone in the US, and that it is supervised by judges.