Amanda Knox and her former boyfriend Raffaele Sollecito were caught hugging and kissing during a secret reunion in New York this week.

The tryst has already led to concerns that the couple should not be in contact with each other now they have been recalled for a retrial.

As reported by the Daily Mirror, Amanda Knox and Raffaele Sollecito were pictured hugging closely, with Amanda closing her eyes during the warm embrace as Raffaele kissed her cheek. 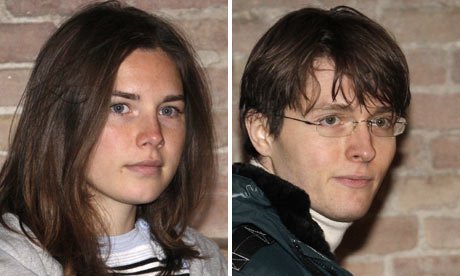 The meeting has led to rumors that the pair have become romantically involved again. James Terrano, who is reportedly Amanda Knox’s boyfriend, was nowhere to be seen.

As Amanda Knox and Raffaele Sollecito walked and chatted along the street, Amanda’s mother walked behind. One onlooker told the Daily Mirror that the pair looked like a couple who had been together for some time.

He said: “You only have to look at him to see he still holds a huge torch for Amanda.

“They never once stopped chatting. It’s astonishing they are allowed to even talk to each other, let along see one another, considering they are both suspects in a murder trial.”

Amanda Knox declined to comment on the reunion, with Raffaele Sollecito admitting the pair have much to plan.

Hours before their secret reunion on Tuesday, Italy’s high court faulted the acquittal of Amanda Knox and Raffaele Sollecito by the appeals court for the murder of Meredith Kercher.