Brazilian government has failed to halt nationwide protests, despite reversing the public transport fare increases that sparked the unrest.

Earlier, there were clashes before Brazil’s football team played Mexico in Fortaleza in the Confederations Cup.

Protesters are angry at corruption and high spending on next year’s World Cup.

Activists say they have not changed their intention to hold the biggest demonstrations yet on Thursday.

Hundreds of thousands are expected on the streets there before another round of matches in the Confederations Cup.

The continued protests come after the authorities in the two biggest cities, Rio de Janeiro and Sao Paulo, said they would reverse the public-transport fare increases.

Sao Paulo mayor Fernando Haddad said the reversal would be a “big sacrifice” and said other investments would have to be cut. 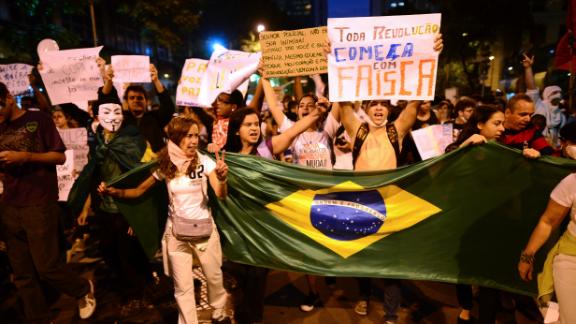 Brazilian government has failed to halt nationwide protests, despite reversing the public transport fare increases that sparked the unrest

The mayors of Cuiaba, Recife, Joao Pessoa and other cities have already announced a reduction in bus fares in response to the protests.

But the protesters were unmoved by the gesture.

“It’s not really about the price [of transport] anymore,” said 18-year-old student Camila Sena, at a protest in Rio de Janeiro’s sister city of Niteroi.

“People are so disgusted with the system, so fed up that now we’re demanding change.”

One demonstration in the city of Belo Horizonte continued for more than 10 hours.

Police fired tear gas and rubber bullets to disperse protesters in the north-eastern city of Fortaleza on Wednesday after at least 30,000 people rallied there.

Clashes erupted when a protest march was stopped by police. Several people were injured, including police officers. Access to the stadium was blocked for at least 30 minutes, but police later allowed people to get in ahead of the game which started at 16:00 local time.

During the protest some demonstrators carried banners reading: “A teacher is worth more than Neymar”, in a reference to Brazil’s star footballer who played and scored against Mexico.

Before the match, Neymar spoke in favor of the protesters, saying in a message on Facebook: “I’m Brazilian and I love my country. I have a family and friends who live in Brazil. For that reason, I want a Brazil which is more just, safer, healthier and more honest.

“The only way I can represent and defend Brazil is on the pitch, playing football. From now on, I will enter the field inspired by this movement.”

“Let’s forget all this commotion happening in Brazil, and let’s remember how the Brazilian squad is our country and our blood,” he said.

The current unrest is the biggest since 1992, when people took to the streets to demand the impeachment of then-President Fernando Collor de Mello.

Vice-President Michel Temer cut short a visit to Israel and the Palestinian territories on Wednesday to return to Brazil.

President Dilma Rousseff has said she was proud that so many people were fighting for a better country.

Many of the demonstrators have complained of the huge sums spent on construction for the World Cup and the 2016 Olympics, which will be hosted by Rio de Janeiro.

The dilemma for the political leadership is how to answer so many different concerns among a vast group of people with momentum and social media on their side, correspondents say.