James Gandolfini died last night after he was discovered having a heart attack in his hotel bathroom in Rome by his teenage son, Michael, it emerged today.

James Gandolfini was on vacation in Rome with Michael, 13, as well as his wife Deborah and baby daughter Liliana, nine months, and had apparently been hoping to “reconnect with his Italian roots” before attending the Taormina Film Festival in Sicily.

After a day out with the family, James Gandolfini, 51, had a heart attack in his bathroom at the Hotel Boscolo and was found by Michael, who raised the alarm and called the hotel reception, according to the hotel manager.

His Sopranos colleagues have led tributes from the showbiz world, with the show’s creator David Chase who compared him to Mozart, praising him as “one of the greatest actors of this or any time”.

When paramedics arrived to take James Gandolfini to hospital, they found him lying on the bathroom floor, according to hotel owner Antonio D’amore.

James Gandolfini was taken to Policlinico Umberto I at 10.20 p.m., and was pronounced dead at 11 p.m. when efforts to revive him proved unsuccessful, according to Dr. Claudio Modini, head of the hospital’s emergency room.

An autopsy on his body will take place today, as is required by Italian law. 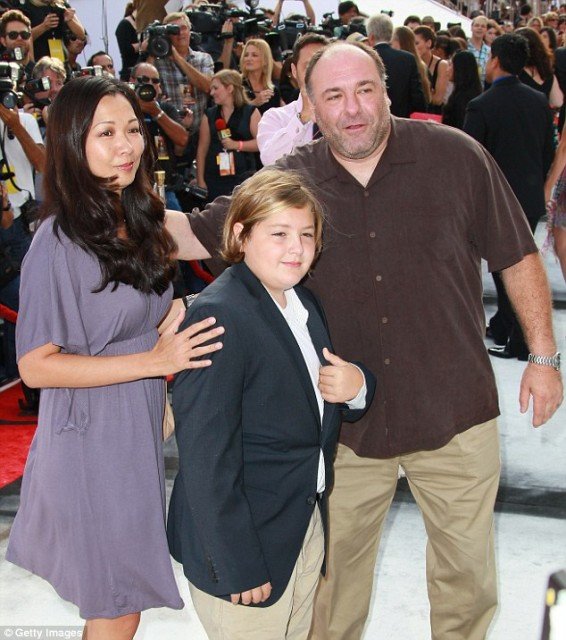 James Gandolfini died last night after he was discovered having a heart attack in his hotel bathroom in Rome by his teenage son, Michael

Mario Sesti, director of the film festival which the star was due to attend this weekend, claimed that James Gandolfini was excited by his Italian vacation because of his family’s link to the country.

“He was so happy to be in Italy, to reconnect with his Italian roots, and he was very excited to come here and receive this award,” Mario Sesti told USA Today.

James Gandolfini was born and brought up in New Jersey, but both his parents were Italian.

The Taormini Film Festival will host a tribute to the actor in place of a round-table discussion which James Gandolfini had agreed to take part in.

James Gandolfini and his family had spent a “beautiful day out together” in Rome before his tragic passing, according to the actor’s assistant, Tom Richardson.

According to Mike Sullivan, a close friend of James Gandolfini’s, Tom Richardson told him: “When they got back to the hotel, Jimmy went to use the restroom. And something happened in there.

“His sister said he was alive when they took him out in the ambulance on the way to the hospital.”

James Gandolfini’s first wife Marcy Wudarski, Michael’s mother, is said to have immediately booked a flight to Italy to comfort her son after learning of the actor’s death.

Marcy Wudarski and James Gandolfini were married for three years until they divorced in 2002.

James Gandolfini’s second wife, former model Deborah Lin, was with the star in Italy along with their daughter Liliana.

Deborah Lin and James Gandolfini married in Hawaii in 2008, and Liliana was born last October. After his daughter’s birth, James Gandolfini said he was “thrilled” to become a father for the second time.

His compelling portrayal of the ruthless mob boss who suffered from panic attacks saw him win three Emmy Awards for the role.

The character apparently died in the series finale, although the audience was never shown the moment of his death, with the screen just fading to black instead.

Speaking to Vanity Fair about the ending, James Gandolfini said: “What the f***? I mean, after all I went through, all this death, and then it’s over like that?”

James Gandolfini’s managers Mark Armstrong and Nancy Sanders paid tribute to the star, saying in a statement: “Our hearts are shattered and we will miss him deeply. He and his family were part of our family for many years and we are all grieving.”