During last episode of Keeping Up With The Kardashians members of the clan focused on guns and protecting the famed family.

Bruce Jenner brought up the subject after saying police officers had advised him to get protection.

“There are a lot of wacko people in the world out there and I think I should have a gun in the house to protect me and my family,” said Bruce Jenner over a family dinner.

“The other day we had heavily armed police officers in our house after we were swatted. That is a good reason to get a gun in my house.”

Bruce Jenner insisted that he would use the gun with deadly force if anyone broke into his home armed. 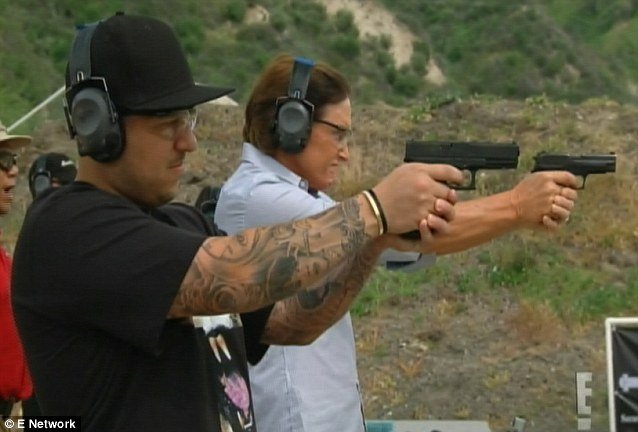 But Kim Kardashian was against the idea: “I would never want a gun in my own home, that is really scary to me, I do not believe in them.”

Momager Kris Jenner was also opposed, saying: “No one is having guns in my house.”

But her husband Bruce Jenner told her he was taking a gun safety course and wanted his young daughters, Kylie and Kendall, to be trained in using weapons.

“It is a one in a million possibility but if it happens I want us to be ready. It is my responsibility to protect my family.”

Bruce Jenner and Rob Kardashian then took their firearm safety course, before Bruce took Kendall to the gun range with Scott Disick and Rob.

Despite being “freaked out” Kendall Jenner got her shots in, but Scott Disick was kicked off the gun range for waving a pistol about in an unsafe way.

Kris Jenner flew into a rage when she discovered her daughter had been to the gun range, but Bruce was not fazed.

Daughter Kylie Jenner sided with her mother and refused to get involved with Bruce’s gun plans.

In the end, despite the disagreements Bruce Jenner won out and bought a gun for the house.