Hundreds of protesters in Hong Kong have marched to the US consulate in support of ex-CIA whistleblower Edward Snowden.

They demanded that local authorities protect Edward Snowden, who is in hiding in Hong Kong.

He also gave an interview to a local newspaper alleging that US intelligence had been hacking into Chinese computer networks.

Protesters and local politicians have demanded clarification from the US government on the allegations.

“Hong Kong is one of the few places in China where internet freedom is still OK. Now the American government is hacking into us,” one protester said.

“That is a crime against human rights.”

Another man brought a poster containing a picture of US President Barack Obama and the words “Big Brother is watching you”. 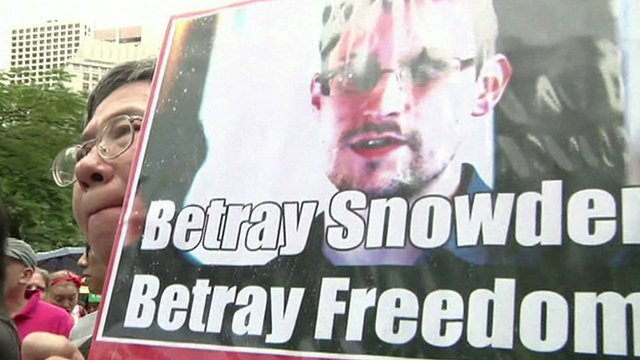 Edward Snowden told the South China Morning Post this week that the US National Security Agency (NSA) had led more than 61,000 hacking operations worldwide, including many in Hong Kong and mainland China.

Edward Snowden left Hawaii for Hong Kong shortly before the highly sensitive leaks surfaced and has vowed to fight any attempt to extradite him to the US.

“I am not here to hide from justice; I am here to reveal criminality,” Edward Snowden told the Post, which said the interview was carried out in a secret location in Hong Kong.

In a US Senate hearing earlier this week, NSA director Keith Alexander defended the internet and telephone data snooping programmes, saying they had disrupted dozens of terror plots.

Intelligence officials have insisted agents do not listen in on Americans’ telephone conversations. And they maintain the internet communications surveillance programme, reportedly code-named Prism, targeted only non-Americans located outside of the US.

Although the information leaked by Edward Snowden has angered the US government, so far he has not been charged by the authorities, nor is he the subject of an extradition request.

Hong Kong’s government says it does not comment on individual cases but will follow any request according to the law, our correspondent reports.

Analysts say any attempts to bring Edward Snowden to America may take months and could be blocked by Beijing.