The internet was awash with unfounded suggestions that the former British Prime Minister may have been romantically involved with 44-year-old Wendi Deng, who is a close friend.

The feverish speculation followed a Twitter claim by BBC business editor Robert Peston, who has close links with Murdoch empire insiders, that he had been “told that undisclosed reasons for Murdoch divorcing Deng are jaw-dropping – & hate myself for wanting to know what they are”.

The rumors are understood to have been emphatically rejected by Tony Blair aides as untrue – either now or in the past – and also as highly defamatory.

A spokesman for Tony Blair told the Hollywood Reporter: “If you are asking if they are having an affair, the answer is no.”

The spokesman said Tony Blair would not be making a public comment on the divorce himself.

With no explanation forthcoming from the Murdoch camp, rumors started flying within hours of the bombshell news that the media tycoon had filed for divorce in a New York court, ending his 14 years marriage to his third wife.

It is no secret that the ambitious Wendi Deng and Tony Blair are good friends. He is godfather to Grace, her older child with 82-year-old Rupert Murdoch.

Rupert Murdoch biographer Michael Wolff described Tony Blair as “one of Wendi’s first official social conquests” and suggested that the former prime minister had seen her as a key link in his efforts to woo her politically powerful husband.

Rupert Murdoch, who is estimated to be worth nearly $11 billion, cited as grounds for the divorce “that the relationship has broken down irretrievably”. 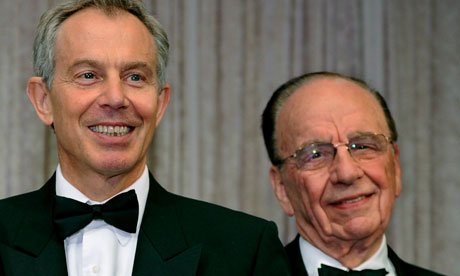 Insiders said the marriage has actually been strained for years. Some pointed to an article in the New York Times last year in which Wendi Deng’s friends admitted the Murdochs were living “largely separate lives” as she looked after their two children and played the socialite while her husband ran his huge media business.

They reportedly came close to splitting up as long ago as 2006 when Wendi Deng reacted with fury to Rupert Murdoch’s decision that their two young daughters, Grace and Chloe, would not have the same say over the running of the family media empire as his children from previous marriages.

Rupert Murdoch’s biographer Neil Chenoweth suggested that the media mogul had planned the divorce as long ago as February after the death of his mother two months earlier gave him extra shares in the family business that he could use to pay off his wife.

In the same month, observers of the couple at the Oscars saw a noticeable change in Wendi Deng’s behavior towards her husband.

“She was snippy with him during the Oscar weekend and she’s really impatient with him these days,” a source at the time told Deadline Hollywood, a film industry website which first reported the divorce.

Michael Wolff recalled reports that Rupert Murdoch told his oldest son, Lachlan, some years ago that he had concluded that marrying the fiery Wendi Deng was a “mistake”.

Other sources claimed the workaholic Rupert Murdoch was more concerned with the imminent division of his media empire into publishing and entertainment arms than with his split from his wife.

Although the couple have a pre-nuptial agreement which should ensure that the Murdoch business empire is not affected by the split, their settlement will have to sort out what happens to their seven homes.

They include a Manhattan apartment Rupert Murdoch bought for $45 million, a 16-acre vineyard in Los Angeles, a flat in London’s Mayfair, an 11-bedroom house in Beverly Hills and a period house outside the Forbidden City in Beijing.

The Wall Street Journal reported in 2000 that Wendi Deng helped break up the marriage of an American couple, Jake and Joyce Cherry, who had befriended her.

In 1988, they arranged for Wendi Deng, then aged 19, to leave China for Los Angeles to learn English.

Wendi Deng reportedly ran off with 53-year-old Jake Cherry and later married him, enabling her to get a “green card” to work in the US. The marriage soon ended after Jake Cherry discovered Wendi Deng was spending time with a man nearly half his age, said the Journal.