President Vladimir Putin has taken the helm of a new political movement called the Popular Front.

The Russian president was appointed by acclamation as head of the movement in front of a crowd of supporters.

The Front is seen by analysts as a way of strengthening Vladimir Putin’s position as the ruling United Russia party has lost support.

It came as thousands of anti-government protesters marched in Moscow to demand Vladimir Putin’s resignation.

Vladimir Putin told his supporters that he hoped the People’s Front would become a “broad public movement” and that it would help citizens with ideas for improvement see them implemented.

He also said he envisaged the movement as a watchdog that would hold those in power to account, “from the president down to the village mayor”.

The speech was interrupted several times by the crowd chanting “Russia!”, “Putin!” and “ONF!” (the Russian initials of the movement).

After the speech a vote was conducted by Vladimir Putin supporter and film director Stanislav Govorukhin.

“Looks like I am going to ask the stupidest question ever,” Stanislav Govorukhin said.

“Who will we nominate as the leader of our movement?” 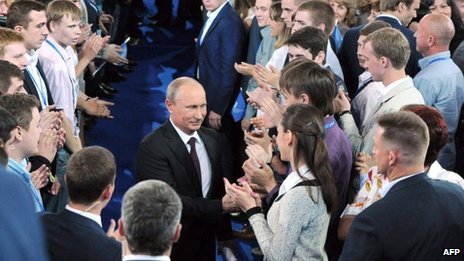 “Should we vote? Are there any other candidates?” Stanislav Govorukhin asked.

“Vladimir Vladimirovich, congratulations. I feel for you, it is a big burden,” he concluded.

Correspondents say President Vladimir Putin hopes the new movement will shore up his support after corruption allegations that have hit the pro-Putin United Russia party.

Meanwhile, opposition activists have marched in Moscow to demand the release of prisoners detained over clashes at an anti-government protest last year.

Ten of 12 people being tried over the Bolotnaya case – named after the Moscow square where the clashes occurred in May last year – had their detention extended last week.

Police say protesters taking part in the demonstrations, which began the day before President Vladimir Putin’s swearing-in in May 2012, turned on them with metal bars and flagstones

Alexei Navalny is facing trial on charges of embezzling money from a regional timber firm, which he has rejected as politically motivated.

“You can’t sit at home when the government begins repressions against ordinary, decent citizens of our country – people who don’t want to live in this swamp, people who want to see their country thrive,” activist Vitaly Zolomov told the Associated Press.

Gay rights activists also joined the march, denouncing a law passed on Tuesday by the Duma imposing heavy fines for providing information about homos***ality to people under 18.