Jiroemon Kimura from Japan, who was recognized as the world’s oldest living person, and the oldest man recorded in history, has died aged 116, local officials say.

Jiroemon Kimura died of natural causes on Wednesday in a hospital in Kyotango, Kyoto, a government statement said.

In December, Guinness World Records recorded Jiroemon Kimura as the oldest man ever verified to have lived.

Jiroemon Kimura was born on 19 April 1897, the same year as aviator Amelia Earhart.

He worked in his local post office until retiring and was said to have helped his son with his farming until he was around 90 years old.

In an interview in December, his nephew, Tamotsu Miyake, said Kimura had “an amazingly strong will to live”. 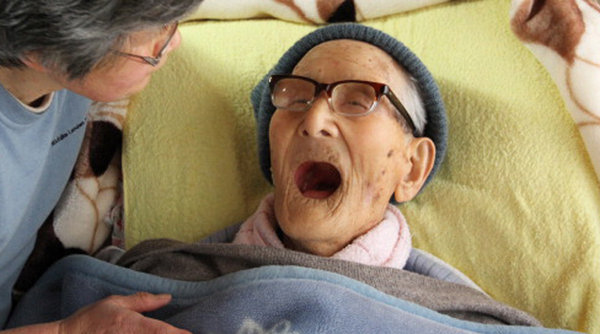 Jiroemon Kimura from Japan was recognized as the world’s oldest living person, and the oldest man recorded in history at 116

“He is strongly confident that he lives right and well.”

In an interview on his 115th birthday, Jiroemon Kimura said he was not sure why he was able to live so long.

“Maybe it’s all thanks to the sun above me,” he said.

“I am always looking up towards the sky, that is how I am.”

“He said his secret to his longevity was eating light to live long,” said Tamotsu Matsuyama.

“At the same time, his main carer and grand-daughter-in-law, Aiko, said his positivity helped him to live so long.”

Japanese woman Misao Okawa from Osaka, who is 115 years old, will most probably inherit the title of world’s oldest living person, reports say.