After previously giving $1 million to the National Museum of African American History and Culture, her total contribution is its biggest so far.

The museum on Washington’s National Mall is due to be completed in 2015.

It will house a 35-seat theatre named after Oprah Winfrey, who is also a member of the museum’s advisory council.

Lonnie Bunch, director of the museum said the media mogul had been very much involved in its creation and talks were taking place to acquire memorabilia from her career.

He said he would love to have one of the microphone’s used during her television show – one of the most-watched programmes in US history, which ended after 25 years in 2011 – to add to the museum’s collection of more than 22,000 items.

The collection helps to tell the story of African American history from slavery to the post-Civil War period, the civil rights era, the Harlem Renaissance and the 21st Century. 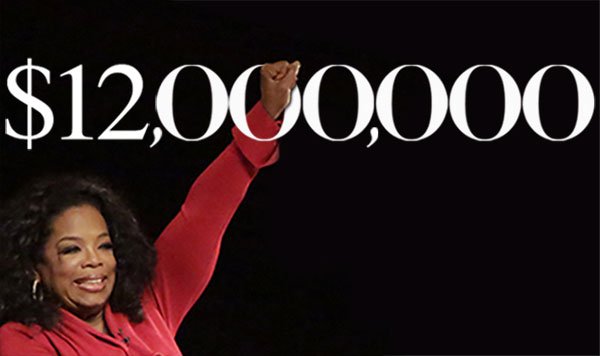 In a statement released by the museum, Oprah Winfrey said: “I am deeply appreciative of those who paved the path for me and all who follow in their footsteps.”

“By investing in this museum, I want to help ensure that we both honor and preserve our culture and history, so that the stories of who we are will live on for generations to come,” she added.

Costing $500 million to build, the US government is providing half of the funding with the remainder being raised through private donations.

Some of the items which will be displayed include the glass-topped casket that held the body of 14-year-old Emmett Till, whose 1955 murder in Mississippi for whistling at a white woman helped spark the civil rights movement.

The museum’s most recent big acquisition was a South Carolina slave cabin dating from the 19th Century.

The cabin from Edisto Island was disassembled in May in preparation for its move to the museum.