Erin Brockovich – who was famously portrayed by Julia Roberts in a movie about her life – has apologized for her drunken boating arrest last Friday as it’s revealed that her blood alcohol content was twice the legal limit.

“At no time was the boat away from the dock and there was no public safety risk,” Erin Brockovich said in a statement, denying police claims that she operated the boat in open waters.

“That being said, I take drunk driving very seriously, this was clearly a big mistake. I know better and I am very sorry,” she added.

“After a day in the sun and with nothing to eat it appears that a couple of drinks had a greater impact than I realized.”

Legal clerk and environmental activist Erin Brockovich, 52, was booked into jail around 10 p.m. on Friday after game warden in Lake Mead, Nevada spotted her struggling with her boat at a marina.

Erin Brockovich had been out on the boat with a male companion but was alone when she tried to dock it.

Edwin Lyngar of the Nevada Department of Wildlife said her blood alcohol content was over twice the legal limit of 0.08 when she was arrested.

“She was obviously struggling to put the boat in the slip, and if you’ve had any experience, it’s a simple enough operation,” Edwin Lyngar said.

The mother of three, who has an estimated net worth of $42 million, had slurred speech and was unsteady on her feet as she tried to dock the boat. She failed a sobriety test and was taken to jail, where she was later released on a $1,000 bail.

Under Nevada law, a first-time offense of boating while intoxicated is a misdemeanor that draws fines from $1,000 to $2,000 but no jail time. Authorities were unsure whether it was Erin Brockovich’s first arrest on the charge. 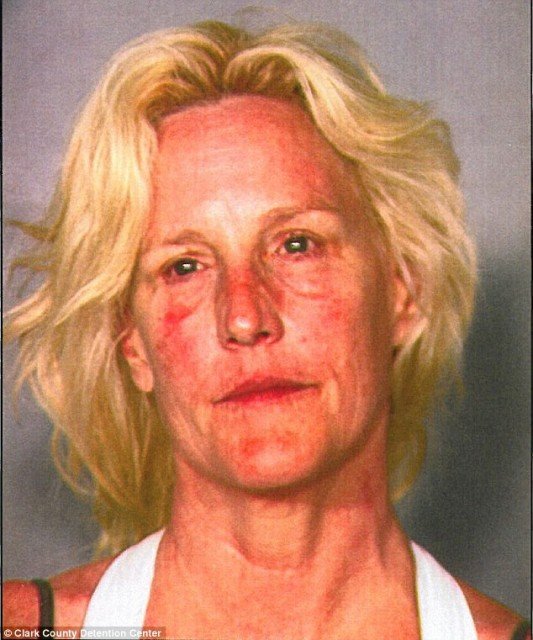 Erin Brockovich, who married her third husband, Eric L. Ellis, in 1999, became a worldwide celebrity after the 2000 Steven Soderbergh film about her life.

As a legal assistant she helped win a record $333 million settlement from a power company after dozens of people were poisoned by chemicals released into the water supply in the California town of Hinkley.

After suffering an injury in an auto accident, Erin Brokovich hired the California law firm Masry and Vititoe to represent her in a civil lawsuit against the other driver. While the firm won her a small settlement, the single mother needed a job to support her family.

The law firm hired Erin Brokovich as a file clerk, which is what ultimately launched the former Miss Pacific Coast’s career in law and public advocacy.

While organizing files for a pro-bono real estate case, Erin Brokovich uncovered medical records that would lead to the largest settlement ever paid out in a direct action lawsuit in U.S. history.

Erin Brokovich’s investigation found that the Pacific Gas and Electric company had been poisoning Hinkley residents for more than 30 years.

Between 1952 and 1966, the company used the chemical hexavalent chromium (often referred to as Cr-6) to fight corrosion in the cooling tower in the Hinkley compressor, which was part of a natural gas pipeline connecting much of northern California to the San Francisco Bay area.

The waste water dissolved the Cr-6 and it ended up in unlined ponds near the cooling tower.

The Cr-6 then found its way into the groundwater, contaminating a two-by-one-mile area around the plant.

For her work, Brokovich was given a $2 million bonus.

Julia Roberts won a Best Actress Oscar for her portrayal of Erin Brockovich in the self-titled movie about the case.

Erin Brokovich and Masry then became the face of environmental litigation and went on to file several lawsuits against various corporations for pollution issues.

Since the film, Erin Brockovich has become a high profile campaigner and TV star with her own series, Final Justice.

Just last year, Erin Brockovich was back on the big screen in the documentary Last Call at the Oasis, which explores challenges related to the planet’s dwindling and increasingly polluted water supply.