Apple has unveiled iOS7 revamp, a new look for the user interface of its smart device operating system, the first to be overseen by its design chief Jony Ive.

It involves a shift away from skeuomorphism – the use of leather, wood and other real-world inspired textures and artifacts in apps.

A similar change has also been made to its OS X system for Mac computers.

Highlighting the new look of the firm’s Game Center app, Apple’s senior vice president of Software Engineering Craig Federighi joked: “We just completely ran out of green felt and wood – this has got to be good for the environment.”

Craig Federighi also showed off a parallax effect which means icons shift against the background image as an iPhone-user tilts their handset one way and another, based on feedback from the device’s accelerometer sensor.

“The new version is almost unrecognizable, which will make it polarizing,” said Jan Dawson, chief telecoms analyst at the consultancy Ovum.

“Some people will love that their phone feels new and different, while others will be disoriented by the newness.

“Finding your Settings app is hard when the icon has totally changed, and the many people who easily get disoriented by their gadgets may well have a negative experience.

“On the other hand, this is a clear statement from Apple that it acknowledges the need to refresh the user interface and is willing to do something pretty dramatic.” 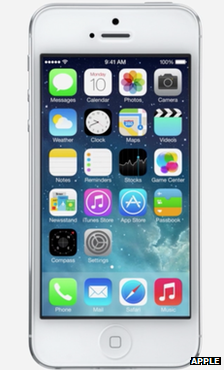 Apple also announced iTunes Radio – a streaming music service offering access to themed stations which can be tailored according to a person’s listening history on iTunes, as well as tracks from specific bands – including unreleased exclusives – which they do not own.

The firm suggested it was a way for users to “discover new music”, and Apple will promote the ability to buy songs that a user likes via its store.

The feature is accessible via iOS 7’s music app and poses a challenge to LastFm, Pandora, Spotify and other similar products.

It comes a month after Google unveiled Play Music All Access, a similar facility for Android devices. But unlike the search firm’s pay-to-use model, Apple is making iRadio accessible without charge if users are willing to listen to adverts, as well as an ad-free option to users buying an iTunes Match subscription.

One music industry watcher suggested Apple’s move could prove disruptive in light of the fact the firm has 575 million iTunes accounts.

Other new features to iOS 7 include:

About 37.4 million iPhones shipped worldwide in the January-to-March quarter according to market intelligence firm IDC, confirming its status as Apple’s biggest source of revenue.

Although that was a rise on the same period in 2012, the study indicates the firm’s smartphone market share slipped to 17.3% while Android’s grew to 75%, thanks in large part to Samsung’s success. It also indicated Apple is facing a similar trend in the tablet sector.

Apple’s products might still be more profitable, but IDC suggested it needed the refresh.

Apple said iOS 7 would be released to the public in the autumn.