The talks are taking place at Panmunjom, a military compound in the demilitarized zone between the two countries.

The meeting comes after months of rising tension and war-like gestures from both sides.

They culminated in the suspension in April of all activity in the Kaesong joint commercial zone.

Kaesong Industrial Complex, which is seen as a symbol of North-South co-operation, had run successfully just inside North Korea for more than eight years.

With tensions between the two countries easing, South Korea invited the North to high level talks in Seoul, but Pyongyang said it wanted lower-level discussions first.

At the end of the morning session, a spokesman for the South’s Unification Ministry said the two sides had discussed technical issues for the future ministerial meeting.

“The atmosphere of today’s meeting… was such that the talks have gone smoothly without any argument,” Kim Hyung-suk told reporters in Seoul. 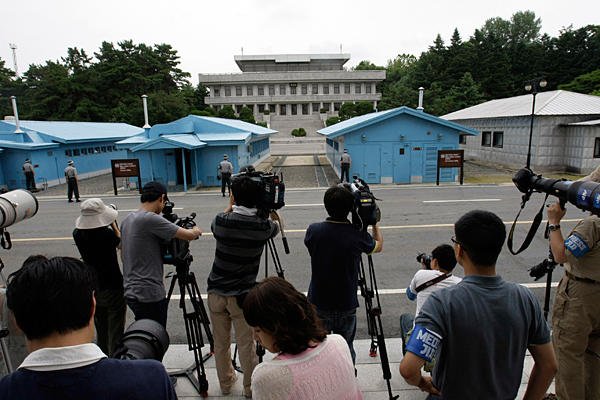 North Korean and South Korean officials hold key talks at Panmunjom, a military compound in the demilitarized zone between the two countries

The South’s three-person delegation – led by the director of the Unification Ministry – left Seoul just before 08:00 for Panmunjom.

Ties between the two Koreas deteriorated earlier this year in the wake of the North’s nuclear test on February 12.

Pyongyang withdrew its workers from Kaesong in April, apparently angered by tightened UN sanctions in the wake of the nuclear test and annual South Korea-US military drills.

Around 53,000 North Korean workers are employed at the Kaesong factory complex by more than 120 South Korean factories.

The zone is a key source of revenue for the North and the biggest contributor to inter-Korean trade.

Last Thursday the North offered talks with the South on the resumption of operations and said it would reconnect a Red Cross hotline if Seoul – which had been seeking such talks – agreed.

The talks closely follow a summit in California between US President Barack Obama and Chinese President Xi Jinping.

Both leaders agreed that North Korea had to denuclearize and that neither country would accept North Korea as a nuclear-armed state, US National Security Advisor Tom Donilon said on Saturday.

China is seen as a key ally of Pyongyang.