Princess Madeleine of Sweden, the fourth in line to the throne, is set to marry US-British businessman Christopher O’Neill in a ceremony in Stockholm on Saturday.

Princess Madeleine, 30, has returned to the Swedish capital from New York, where she met Christopher O’Neill two years ago.

The ceremony is not expected to be as lavish as the wedding of her sister, Crown Princess Victoria, in 2010.

Princess Madeleine, also known as the Duchess of Halsingland and Gastrikland, met Christopher O’Neill, 38, in New York while she was working for the non-profit organization, World Childhood Foundation.

The youngest child of King Carl XVI Gustaf and Queen Silvia has been keeping a low profile since moving to the US in 2010 after her engagement to a Swedish lawyer came to an abrupt end.

Princess Madeleine has also had a complicated relationship with the Swedish press, who dubbed her the “party princess” when she was spotted frequenting high-end Stockholm clubs in her early twenties. 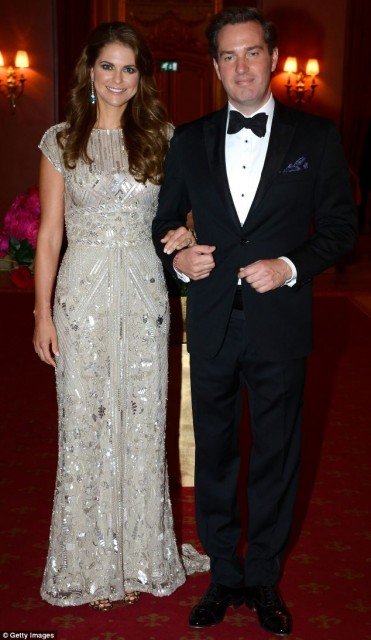 The couple will tie the knot in Stockholm’s Royal Chapel before a horse and carriage procession through the medieval old town of Gamla Stan.

Despite some 600 guests, the wedding is expected to be more low-key than her sister’s ceremony in 2010, when the whole of the Swedish capital was transformed for the celebrations.

“It won’t be anything like [Crown Princess] Victoria’s wedding. Firstly, because Madeleine is not a successor to the throne,” Roger Lundgren, the editor of a Swedish magazine about royalty told Associated Press news agency.

“Secondly, this is a private wedding – the king is paying for it himself,” he adds.

The royal guest list is said to include the UK’s Earl and Countess of Wessex, Prince Edward and Sophie, Princess Takamado of Japan and princes and princesses from Norway, Denmark, Greece, Luxembourg and Monaco.

The Royal Court said on Friday that Princess Madeleine’s wedding dress was made by Italian designer Valentino Garavani.

Her fiancé, who enjoys dual British-American citizenship, has declined a royal rank in Sweden which would have required him to become a Swedish citizen.

Princess Madeleine and Christopher O’Neill are expected to return to the US and continue working after the wedding.