There are rumors that Russian President Vladimir Putin, who just announced his divorce from his wife of 30 years Lyudmila Putina, and former gymnast Alina Kabaeva have decided to get married.

But who is Vladimir Putin’s potential new bride?

Alina Kabaeva started rhythmic gymnastics in Tashkent, Uzbekistan in 1987 at the age of 4. She made her international debut in 1996. In 1998, at age 15, Alina Kabaeva took out the European Championships in Portugal, her victory considered by many to be completely “out of the blue”.

Alina Kabaeva took home a gold medal in rhythmic gymnastics at the 2004 Olympic Games in Athens. She also took a bronze medal at Sydney in 2000. 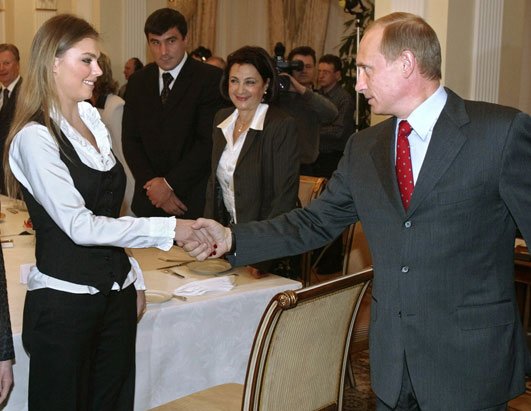 In October 2004, Alina Kabaeva announced her retirement from the sport. However, in June 2005, the Russian head coach Irina Viner announced a possible comeback.

Alina Kabaeva resumed her sport career at an Italy-Russia friendly competition in Genoa, on 10 September 2005. On March 5, 2006, she won the Gazprom Moscow Grand Prix, taking the second and third places. She won the silver medal in all-around at the 2006 European Championships.

The gymnast finished 4th in qualifications at the 2007 World Championships and did not advance into the finals due to the two per country rule with Vera Sessina and Olga Kapranova placing ahead of Alina Kabaeva. She completed her career at the 2007 Season.

Since 2005 Alina Kabaeva has been a member of the Public Chamber of Russia.

She also appeared briefly in the 2001 Japanese movie Red Shadow, performing her gymnastic routine. Since 2007, Alina Kabaeva has been a member of the Russian parliament, the State Duma, representing the United Russia party. Since February 2008 she has been Chairman of the National Media Group’s Public Council, the media group that controls Izvestia, Channel One and REN TV.

In January 2011, Alina Kabaeva appeared on the cover of Vogue Russia.