Some 600 people have been evacuated in the German city of Dresden as Central Europe floodwater continues to threaten parts of southern Germany, Austria and the Czech Republic.

The level of the River Elbe in the historic German city is not expected to peak until Thursday morning.

Emergency workers have been shoring up a dyke under threat from high water in the Austrian city of Krems.

At least 12 people have died and two are missing as a result of the floods across the three countries.

Seven deaths were recorded in the Czech Republic and three in Germany, while two people were reported dead and two missing in Austria, according to a European Commission update early on Tuesday evening.

Parts of Germany have not seen such severe flooding in centuries. However, in the Czech Republic, the water level has stabilized in the capital Prague, where there had been fears of a repeat of disasters in 2002 and 1997. 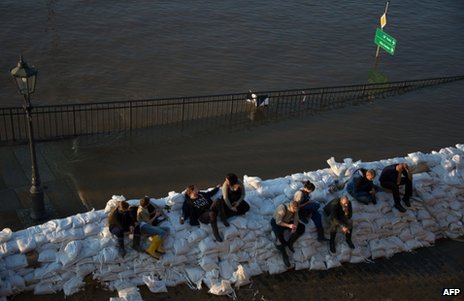 Some 600 people have been evacuated in Dresden as floodwater continues to threaten parts of southern Germany, Austria and the Czech Republic

River levels rose after sudden heavy rain following a very wet spring, which had left the ground saturated and unable to absorb the extra water.

Six hundred people had to leave their homes in Dresden and electricity was turned off in some parts of the city, a city spokeswoman told the German news agency dpa.

In another eastern city, Halle, streets were under water on Wednesday morning. According to German news magazine Spiegel, it is the highest water level in the city in four centuries.

Meanwhile, the floods were receding in the south German city of Passau. People could be seen sweeping up muck from their streets.

In Krems, the Austrian authorities were making plans to evacuate villagers as a local dyke looked at risk of collapsing under the swollen Danube.

Thousands of people left their homes in the Czech Republic in recent days as floodwater threatened to overwhelm flood barriers.

In the low-lying industrial city of Usti nad Labem, the River Elbe was spilling over the 10 m-high (33 ft-high) metal flood barriers.

The peak there is expected some time on Wednesday.

The main rail link connecting Prague and Berlin in Germany has been underwater, with trains being diverted.