The image of a woman in a red cotton summer dress with a white bag slung over her shoulder and a masked policeman firing noxious tear gas spray that sends her curly hair billowing upwards has become the symbol of the Turkish.

Endlessly shared on social media and recreated as artwork on posters and stickers, the image of the woman in red has become the leitmotif for female protesters during days of violent anti-government riots in Istanbul.

It has thrust Turkish academic Ceyda Sungar into the limelight but she says her experience is typical of people in her country who fight for their rights.

Ceyda Sungar, an academic in city planning at Istanbul Technical University, told Turkish newspaper Radikal: “Every citizen defending their urban rights, every worker defending their human rights, and every student defending university rights has witnessed the police violence I experience.”

Ceyda Sungar, who is part of the Taksim Solidarity Platform protesting against the redevelopment of Gezi Park, has since declined further interviews as she is believed to be uncomfortable with her position as the focal point of the movement.

But it has become a galvanizing force for fellow protestors.

“That photo encapsulates the essence of this protest,” says maths student Esra at Besiktas, near the Bosphorus strait – one of the many centres of this week’s protests.

“The violence of the police against peaceful protesters, people just trying to protect themselves and what they value.”

In one artist’s rendering which has been plastered on walls in Istanbul and elsewhere the woman appears much bigger than the policeman.

“The more you spray the bigger we get,” reads the slogan next to it.

The U.S. and the European Union as well as human rights groups have expressed concern about the heavy-handed action of Turkish police against protesters.

Turkish PM Tayyip Erdogan branded the protesters on Monday extremists “living arm in arm with terrorism”, a description that seems to sit ill with the image of the woman in red.

Deputy PM Bulent Arinc has apologized for police violence and was due to meet organizers of the demonstration against plans to build a replica Ottoman-era barracks on Istanbul’s Gezi Park in Taksim Square.

But he refuses to talk to unnamed groups he accuses of exploiting anger over police action against the original protest to foment broader violence.

He is in control of the government after Recep Tayyip Erdogan flew off to a state visit to North Africa on Monday.

Recep Tayyip Erdogan did not comment on domestic matters at a news conference in Algiers on Tuesday.

Bulent Arinc apologized for “excessive violence” by police against the initial Taksim demonstration, which contrasted sharply with Recep Tayyip Erdogan’s dismissal of the protesters as “looters” and comments linking some to “terrorism”.

President Abdullah Gul has also made markedly more restrained comments on the protests.

Today thousands of people remained at a makeshift camp at Taksim, which has become a focal point of the demonstrations.

Small tents have appeared, food and face masks are on sale and a library is being created. 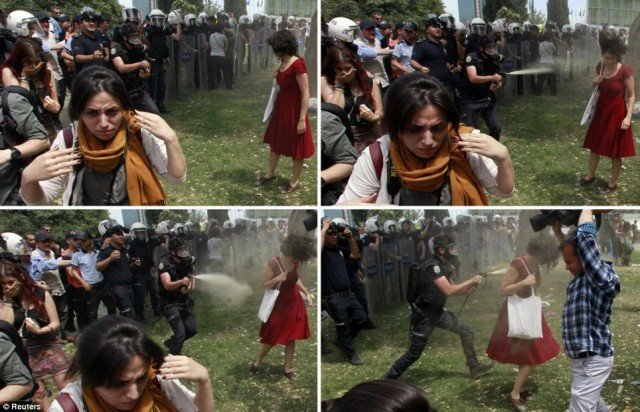 Ceyda Sungar, woman in red who becomes symbol of Turkish protests being doused with pepper spray, is an academic in city planning at Istanbul Technical University

British student Melisa Kenber, 19, said she was chased by police wielding tear gas canisters after she filmed the protests.

The Leeds University student from Ripon, North Yorkshire, was visiting family in Istanbul when she became caught up in the protests.

As she started to video the police they yelled: “No pictures, no pictures”, and ran after her until she reached her car, her eyes streaming from the gas.

Melisa Kenber said: “I go to Istanbul every year but this time I went, before it all kicked off, I had never hear people so frustrated and angry and complain about the government.

“It was like a bomb waiting to go off. The final straw was at Taksim Square.

“There were thousands of people there, listening to bands and talking, it was a really nice atmosphere.

“But just before dawn police arrived with canisters of gas and water bombs.”

Turkish state-run news agency Anadolu Agency said today the people were detained in the city of Izmir for allegedly “inciting the people to enmity and hate”. It said police were still looking for 13 others.

Turkey’s main broadcast media have been criticized for shunning the coverage of police brutality at the protest onset on Friday. Many people turned to social media to keep up to date with the developments.

Recep Tayyip Erdogan, who has dismissed the protests as demonstrations organized by an extremist fringe, has referred to the social media as “the worst menace to society”.

Clashes spread overnight to the eastern province of Tunceli, where police fired tear gas and water cannon at hundreds of protesters who set up barricades and threw stones at them, witnesses said.

Police intervened in a similar way against demonstrators in the capital, Ankara, as well in Hatay province on the Syrian border where a 22-year-old man died after being hit in the head at a rally late on Monday.

The DISK union confederation, including unions in the metalworking, health and energy sectors, was due to stage a walkout on Wednesday, joining another labor confederation in a protest against the government.

Last night, some protestors dressed in more combative gear and sporting face masks as they threw stones, but the large number of very young women in Besiktas and on Taksim Square where the protests began on Friday evening is notable.

With swimming goggles and flimsy surgical masks against the teargas, light tasseled scarves hanging around their necks, Esra, Hasine and Secil stand apprehensively in the Besiktas district on Monday evening.

They are joined by ever growing numbers of youngsters as dusk falls and the mood grows more somber.

They belong, as perhaps does the woman in red, to the ranks of young, articulate women who believe they have something to lose in Recep Tayyip Erdogan’s Turkey.

They feel threatened by his promotion of the Islamic headscarf, symbol of female piety.

Many of the women point to new abortion laws as a sign that Recep Tayyip Erdogan, who has advised Turkish women to each have three children, wants to roll back women’s rights and push them into traditional, pious roles.

“I respect women who wear the headscarf, that is their right, but I also want my rights to be protected,” says Esra.

“I’m not a leftist or an anti-capitalist. I want to be a business woman and live in a free Turkey.”

Recep Tayyip Erdogan, who has won three successive elections and has a huge parliamentary majority, has been accused of taking an authoritarian turn after initial economic advances and early democratic reform.

Critics accuse him of pursuing an “Islamist” agenda by easing restrictions on the wearing of headscarves in state institutions, limiting alcohol sales and promoting broader religious projects.

Mustafa Kemal Ataturk, founder of the secular republic formed in 1923 on the ashes of the Ottoman Empire, encouraged women to wear Western clothes rather than headscarves and promoted the image of the professional woman.

Ironically, Recep Tayyip Erdogan is seen these days as, for better or worse, the most dominant Turkish leader since Ataturk.

After first sweeping to power in 2002, he remains unrivalled in popularity, drawing on strong support in the conservative Anatolian heartland.

The weekend demonstrations in dozens of cities suggest however his popularity may be dwindling, at least among middle classes who swung behind him in the early years of political and economic reform that cut back the power of the army and introduced some rights amendments.

“Erdogan says 50 percent of the people voted for him. I’m here to show I belong to the other 50 percent, the half of the population whose feelings he showed no respect for, the ones he is trying to crush,” says chemistry student Hasine.

“I want to have a future here in Turkey, a career, a freedom to live my life. But all these are under threat. I want Erdogan to understand,” she adds.

U.S. Vice President Joe Biden Tuesday night said only Turks can solve the problem of anti-government protests sowing unrest in Turkey. But he says the U.S. is concerned and isn’t indifferent to the outcome.

Speaking at the American-Turkish Council’s annual conference, which was attended by one of Turkey’s deputy prime ministers, Joe Biden said the U.S. supports free assembly, a free press and non-violence by government and demonstrators.

He added that Turkey mustn’t choose between democracy and economic progress.

Joe Biden also said the U.S. and Turkey sometimes disagree on tactics but share common goals, like a two-state solution in Israel, a non-nuclear Iran and a nonsectarian Syria.

Protesters are coming better prepared now than when the unrest first began.

Some have hard-hats, some are dressed all in black, most wear running shoes. But many are dressed as femininely as the girl in the red dress snapped on Taksim Square.

“Of course I’m nervous and I know I could be in danger here,” said 23 year-old economics student Esra, who says her parents support her protest.

“But for me that is nothing compared to the danger of losing the Turkish Republic, its freedoms and spirit.”