Phil Robertson, patriarch of the family featured in the Duck Dynasty reality show, is a living legend in Louisiana and is better known by his alias: the Duck Commander. 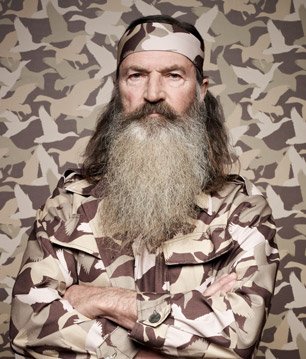 He may not look like it, but Phil Robertson played first-string quarterback ahead of football star Terry Bradshaw at Louisiana Tech University in the ’60s. They were both drafted into the NFL but Phil Robertson turned it down because it interfered with duck season and he was not interested in having “large, violent… men chasing me trying to stomp me in the dirt”. Instead he stayed in Louisiana, married his high school sweetheart, Miss Kay, built a house down by the river and together they raised four children.

Phil and Miss Kay Robertson have four sons together: Alan (who previously worked with Duck Commander before becoming a minister but has since returned to the company; he is not featured on the show), Jase, Willie, and Jep.

Phil Robertson’s love for the outdoors leads him to create the Duck Commander® Duck Call in 1973, which has gone on to become the most trusted duck whistle ever conceived.

Duck hunting is so important to Phil Robertson that he follows a strict routine of no showering, no shaving, and no clothes washing of any kind during the ten-week season to ensure a bountiful haul.

Phil Robertson is known for his dislike of modern technology (he proudly admits that he does not own a cellphone or a computer) and his concern that his grandchildren are becoming “yuppies”.