Tens of thousands of Turks have staged a third day of protests across the country with police again using tear gas and water cannon in some areas, including in Istanbul, where crowds had converged on the prime minister’s office.

The protests were sparked by plans to build on Istanbul Gezi Park but have broadened into anti-government unrest.

Prime Minister Recep Tayyip Erdogan says the protesters are undemocratic, and said the development will go ahead.

He has accused opposition parties of provoking the demonstrations, which represents the most sustained anti-government unrest for a number of years.

Interior Minister Muammer Guler told state media more than 1,700 people had been arrested during protests in 67 cities, though many had since been released.

Hundreds of people are reported to have been injured in the clashes.

Protests over the demolition of Gezi Park to make way for the rebuilding of an Ottoman era barracks, reportedly to house a shopping centre, began on a small scale earlier this week.

Protesters said the park was one of the few green spaces in Istanbul, and were angry at the loss of public space for commercial purposes.

But after police used tear gas and water cannon were used to break up the protests, triggering accusations of excessive force, the numbers in Taksim Square, next to the park, rocketed. 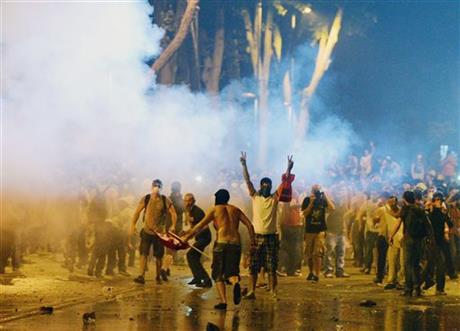 Ten of thousands of people took to the streets of towns and cities, many calling on the government to resign.

Police pulled out on Saturday afternoon, reportedly after President Abdullah Gul urged restraint, and by Sunday there was a carnival atmosphere.

But clashes continued, including in the Besiktas district, where police fired tear gas against protesters, some of whom built barricades or threw stones at Recep Tayyip Erdogan’s Istanbul office.

In Ankara, police fired tear gas at thousands of protesters who were attempting to march on the prime minister’s office there.

There were further reports of tear gas in Izmir, on the Aegean coast, and in Adana in the south.

The protests reflect the public’s anger with the Turkish government, which they believe is becoming increasingly authoritarian.

They fear Recep Tayyip Erdogan’s Justice and Development Party (AKP) is trying to impose conservative Islamic values on the officially secular country and infringe on their personal freedoms.

Many felt insulted when he defended the legislation by calling people who drink “alcoholics”.

In a televised interview on Sunday, Recep Tayyip Erdogan, in power since 2002, denied accusations of being a dictator, saying he was “a servant of the people”.

He said the protests were being provoked by the opposition Republican People’s Party (CHP), and that those taking part were trying to undermine democracy, dismissing them as “a few looters”.

Recep Tayyip Erdogan also criticized social media, through which the protests have been co-ordinated and discussed, calling Twitter a “curse” and an “extreme version of lying”.

The crackdown has been condemned by rights groups and by the US.