Jockey International has introduced JOCKEY Bra, which is based on a brand new sizing system focused on breast volume rather than the rigid cup and band measurement system currently used in the industry.

Instead of the typical A, B, C, D, etc, cup, Jockey’s Volumetric Fit System measures the volume and shape of a woman’s breast plus an under-bust measurement, with the volumetric sizes running from 1 through to 10. The new system has 55 size combinations, and promises to address the long-bemoaned problem of ill-fitting bras.

Cup sizes currently are based on two measurements – the breast at its fullest point, minus the rib cage measurement. If it’s a one-inch difference, it’s an A cup; a two-inch difference, a B cup, and so on. Jockey International says this equation doesn’t account for volume and different breast shapes.

Bra sizes also vary widely from one manufacturer to another, and from country to country, and women’s bodies and breasts often don’t conform to the arbitrary sizes offered by companies. These are the problems Jockey is seeking to solve.

“Through our research, and countless hours of testing and talking with women, we are confident we are answering women’s desire for the perfect-fitting bra.”

The Volumetric Fit System can be ordered from Jockey.com for $19.95 which can be redeemed as a $19.95 discount off the price of a bra. It comes in a small mesh bag and contains 10 plastic molded cups in different sizes, a measuring tape and a booklet of instructions and bra styles.

Women using the system should select a cup that looks closest to their size and place it over their breast. The cup that fits is the one with the best coverage, with no gaps or “spillage”. 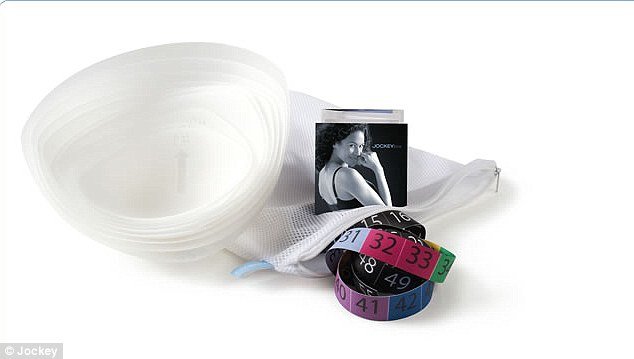 Jockey says that in contrast with the 80-year-old alphanumeric measuring system which is a pure mathematical equation, the new system takes into account the volume of a woman’s breast rather than just her measurements.

Bra shopping is notoriously traumatic, with research showing 75% of women have trouble finding a bra that fits properly and a staggering 85% are wearing the wrong sized bra.

“Women also dislike the bra shopping experience due to the overwhelming number of bra choices, lack of attentive service, and complexity and variance of proper sizing,” says the Jockey website.

According to research on Jockey’s website, 53% of women have never been professionally fitted for a bra.

The JOCKEY Bras themselves come in five different styles so far: Classic Contour, Tailored Contour, Double-Lined Contour, Classic-Soft Cup and Double-Lined Soft Cup and they each come in black, white and nude colors. Jockey has also pledged not to discontinue any of its bra styles.

The JOCKEY Bras come with a patented “3-D Contour support” replacing the underwire, which “supports, cups and shapes the breast without any poking, giving women an exceptionally comfortable fit”.

Bra cup sizes as we know them were invented in 1932, and band sizes became popular in the 1940s. The sizes have barely changed since then, though the range has expanded along with the general population’s weight.

The originator of the bra was Parisienne Madaleine Gabeau, who received a U.S. patent on 21 November 1911 for a bra with soft cups and a metal band supporting and separating the breasts.

With a price tag of $60, it remains to be seen whether or not the JOCKEY Bra and sizing system will catch on, but new adopters can rest assured that the company has a money-back satisfaction guarantee on its new bras.

Check on Jockey.com for more information.