Nathaniel Richardson, a Texas Army veteran, is being questioned in connection with poison letters sent to President Barack Obama and New York City Mayor Michael Bloomberg after his wife found a container in their refrigerator filled with what appeared to be ricin.

Father-of-five Nathaniel Richardson is a civilian employee of the Department of Defense who works at the Red River Army Depot. Sources said he is being treated as a person of interest.

His wife, actress Shannon Glass, told officers that as well as the container in the fridge, she also found internet searches related to ricin production, Barack Obama and Michael Bloomberg on their computer.

The development comes two days after it emerged that Mayor Michael Bloomberg and his anti-gun group were sent two ricin-laced letters. On Thursday, it was revealed that another, identical letter was sent to President Barack Obama.

Nathaniel Richardson, 37, was taken into police custody but has not been arrested. He is not considered a suspect at this time, reports the New York Post.

Neighbors said he worked at the Red River Army Depot, which was once used as an ammunition storage facility, and which now repairs Humvees and other military vehicles.

Shannon Glass, 35, is a model and actress who has had small roles in The Vampire Diaries and The Walking Dead. She is pregnant with her sixth child.

It comes after one of the ricin-tainted letters intended for Michael Bloomberg was pictured for the first time.

The envelope shows the letter, posted on May 20, was postmarked at Shreveport, Louisiana, where other letters intended for Mayor Michael Bloomberg and President Barack Obama were also handled.

The typed threat in the letter, splattered with the poisonous substance, is also shown. It tells the pro-gun control mayor: “You will have to kill me and my family before you get my guns.

“Anyone wants to come to my house will be shot in the face. The right to bear arms is my constitutional God-given right and I will exercise that right ’til the day I die.

“What’s in this letter is nothing compared to what I’ve got planned for you.” 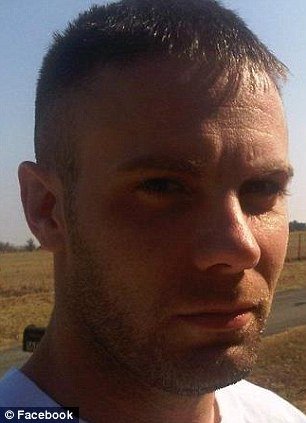 The letter to the president was received at a mail screening facility and did not reach the White House, law enforcement sources told NBC4.

One of the letters sent to Michael Bloomberg was retrieved at the City Hall, and the second arrived at the headquarters of Mayors Against Illegal Guns, which Bloomberg operates and personally finances.

They contained threats warning him to stay away from the gun laws debate, authorities said.

NYPD officials said the threatening letters were opened on Friday in New York at the city’s mail facility and on Sunday in Washington at the headquarters of the nonprofit.

Three members of the NYPD fell ill after being exposed to the letters, which contained a “pink, orange oily substance”, authorities said. Their symptoms have since subsided.

Michael Bloomberg, speaking Friday on his weekly WOR Radio show, shrugged off any specter of danger.

“There’s always threats, unfortunately. That comes with the job,” he said.

“I trust the police department and I feel perfectly safe. I’ve got more danger from lightning than from anything else and I’ll go about my business.”

On Wednesday, he said it would not scare him away from engaging in the debate over gun laws.

“And I know I speak for all of the close to 1,000 mayors in Mayors Against Illegal Guns,” he said.

“This is a scourge on the country that we just have to make sure that we get under control and eliminate.”

It is not yet known why it took the FBI and the NYPD five days to announce the discovery.

The matter is being investigated by the FBI Joint Terrorism Task Force which said that the letter sent to Manhattan for billionaire Michael Bloomberg arrived at 100 Gold Street – the home of the Department of Housing Preservation and Development.

Both the New York and Washington D.C. notes were addressed to Michael Bloomberg and contained threats referencing the debate on gun laws.

The second letter to the mayor was opened by Mark Glaze, director of Mayors Against Illegal Guns, who has not been reported to have fallen ill.

The NYPD confirmed preliminary testing indicated the presence of ricin.

“The FBI has an investigation ongoing and so things like the exact wording and the postmarks, etc. we’re not going to disclose,” NYPD deputy commissioner Paul Browne told WCBS 880.

“It was a pink-orange oily substance that subsequently, in the preliminary tests, indicate the presence of ricin.”

Ricin is a poison found naturally in castor beans.

It’s not clear if the letters were related to other threatening, ricin-laced letters sent to other lawmakers recently.

Authorities are now “in the process of searching to determine if there may be additional letters”, according to the statement.

Mayor Michael Bloomberg is an outspoken critic of current gun laws and has campaigned nationally and on Capitol Hill for stricter gun legislation – using his own considerable wealth to fund commercials.

The confirmation of ricin present in both letters came through on Wednesday from the National Bioforensic Analysis Center in Maryland.

Ricin symptoms depend on the amount of exposure and dose received, but within a few hours lead to cough, fever, nausea, tightness in the chest and heavy breathing.

Death follows through fluid buildup in the lungs.

Several ricin-laced letters have been sent to U.S. politicians over the past few months – including one addressed to President Barack Obama in mid-April.

The Shreveport postal hub handles mail from parts of Louisiana, Texas and Arkansas.

A Mississippi man, James Everett Duschke stands accused of making the poison ricin and sending those letters – which also went to Senator Roger Wicker and a Mississippi judge.

Initially, a friend of James Everett Dutschke’s, Paul Kevin Curtis was arrested, but he claimed he had been framed after he was released.

What do the poisoned letters say?

One of the ricin-tainted letters sent to Bloomberg has been pictured. It reads:

“You will have to kill me and my family before you get my guns.

“Anyone wants to come to my house will be shot in the face.

“The right to bear arms is my constitutional God-given right and I will exercise that right ’til the day I die.

“What’s in this letter is nothing compared to what I’ve got planned for you.”