At least 16 children and their teacher have been killed when their school bus caught fire near Gujrat in eastern Pakistan, police say.

At least seven more children were taken to hospital after the incident on the outskirts of the city of Gujrat.

Police said a compressed gas cylinder had exploded on the bus after fire broke out.

The bus driver is reported to have survived. 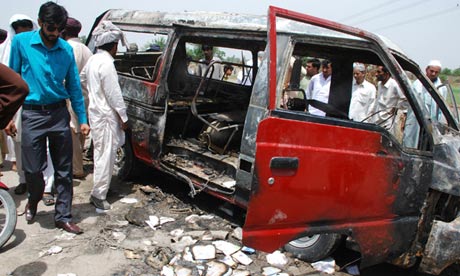 The children, aged between four and 10, were just a few miles from their school in Gujrat, about 120 miles south-east of the capital Islamabad, when the incident happened.

Police officer Dar Ali Khattak told the AFP news agency the fire was apparently caused by a spark when the driver of the dual-fuel bus switched from gas to petrol.

Two children who survived by escaping from a window in the back of the bus told reporters they had smelt gas before the fire broke out.

One boy said the other children were shouting: “Brother, save us, save us. We are burning.”

“I took a huge stick and broke the glass. I tried to save them but I couldn’t,” he said.

Compressed natural gas is used in millions of vehicles in Pakistan as a cheaper alternative to diesel and petrol.

Numerous previous vehicle explosions have been blamed on substandard cylinders used to contain the fuel.