Microsoft has unveiled its next-generation console, the Xbox One, which will go on sale later this year.

Xbox One was shown off alongside a new Kinect sensor and a redesigned gamepad.

The firm’s Entertainment and Devices Division accounted for $9.6 billion worth of sales in Microsoft’s last financial year.

That only represented about 13% of its total revenue for the period – but one analyst said the importance of this launch should not be underestimated.

“Microsoft is very strong in business software and the enterprise cloud business, but its consumer businesses are facing tremendous challenges: PCs are declining rapidly and Windows Phone handsets have only a fraction of the market shares of rivals,” said Jia Wu from consultants Strategy Analytics.

“This is also the unique asset which Microsoft has that can differentiate itself from Apple, Google and several of the other large tech companies.”

Microsoft’s decision to show off its new hardware in the opening minutes of its presentation sharply contrasted with Sony’s PlayStation 4 press conference in February when the Japanese company decided not to reveal the look of its machine – a move that was mocked by some commentators.

Despite earlier speculation, Microsoft’s machine does not require an always-on internet connection and will run second-hand games – the firm said it would provide more details about this “in the coming weeks”.

The Xbox One sees Microsoft add a Blu-ray drive and Skype functionality to its console, incorporate vibrating feedback into its gamepad’s triggers, and upgrade the Kinect camera’s sensor to 1080p high definition resolution.

It said the new Kinect would be better at analyzing body movements, allowing users to more accurately control games characters and navigate other entertainment options.

“When you’re exercising, it can read your heartbeat,” claimed the firm.

New tools will also allow users to record and edit gameplay so clips can be easily uploaded to the web.

EA Sports was first to announce new titles for the machine revealing FIFA 14, Madden NFL 25, NBA Live 14 and the fighting game UFC would all launch on the platform within the next 12 months using a new games engine called Ignite. 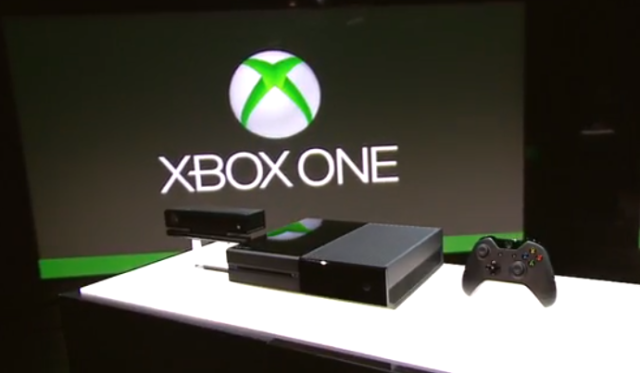 Microsoft has unveiled its next-generation console, the Xbox One, which will go on sale later this year

It said the new machine allowed it to carry out four times as many calculations a second as the Xbox 360 and 10 times more “animation depth and detail”.

Microsoft Studios also revealed that Forza Motorsports 5 – the latest in its own racing car franchise – would be available when the console launched.

The division added that it planned to release 15 games within the console’s first year, eight of which would be new franchises.

Activision also provided a first look at the next title in its Call of Duty series – Ghosts. It will use a new games engine to take advantage of the Xbox One’s improved graphics capabilities, offering more detailed textures for human skin and other features. The title will also be released on rival platforms.

French publisher Ubisoft was not part of the launch, but took the opportunity to announce that two games in development – Watch Dogs and Assassin’s Creed IV Black Flag – would be available for the Xbox One before the end of 2013.

The company’s chief executive, Yves Guillemot, said he was excited by the opportunities offered by the machine’s improved specifications.

“We believe it will reinvigorate the industry,” he said.

“There’s a huge step up in graphics and there’s a big step up in terms of memory as well.

“It will take time to take full advantage of the machines because we’ll have to learn how to best optimize the technology – but even from the beginning you will see a huge difference between a game on the two different generations.”

Much of the presentation was dedicated to the console’s non-gaming features including its ability to make video calls; trigger live TV and online movies by voice command; and run several programs simultaneously without any apparent drop-off in performance.

Time was also given to promote an upcoming live-action television series based on Microsoft’s Halo games franchise which movie director Steven Spielberg is working on. The firm said tie-in interactive content would be offered exclusively to the Xbox One.

“Where Nintendo’s approach to next-gen gaming seems to ignore the need to share time with television and other forms of entertainment, and Sony’s approach seems willing to share the space, Microsoft’s vision is to so blur the line between different forms of entertainment that switching from game to television or movie watching will be as simply as flipping between television channels,” said Brian Crecente, news editor at games site Polygon.

“More importantly, it is lining up to make its system the one through which all entertainment happens. If it manages to pull it off, the Xbox One could become the one jumping off point for all forms of entertainment.”

News of a five-year deal with the US’s National Football League – which will allow sports fans to call up statistics, video replays and information about what live events mean for their fantasy teams – may also appeal to Microsoft’s domestic audience.

However, it did not discuss whether it was pursuing similar tie-ups for consumers overseas.

Microsoft is planning to launch its new console at a time when many video games makers are trying to reduce costs.

Electronic Arts, Square Enix and Activision Blizzard are among firms which have announced layoffs over the past couple of months.

But the updated machines may put the companies under fresh strain.

Games engine developer Epic has warned that if studios want to take full advantage of the advances in graphics power that will be available, then their design costs could be double what they were when the Xbox 360 and PS3 launched.

“That creates a risky proposition for developers.

“But the costs are going to be mitigated to an extent – studios have said it will be easier to make games on next-gen platforms because they’re going to be closer to the development environments that are common on the PC side.”

Lewis Ward was referring to the fact that Microsoft has decided to power its machine with an eight-core x86-based CPU (central processing unit) made by AMD rather than continue with IBM’s PowerPC technology. The move means its console will run off a chip that is similar to those found in most PCs.

Sony has also opted to switch from its proprietary Cell processor tech to the x86 architecture meaning, in theory, it should be easier to port a title across different platforms.

However, the move means neither of the two new consoles will be backwards compatible with the former generation’s catalogue of games.

Both Microsoft and Sony plan follow-up “keynote” announcements at the E3 trade show in Los Angeles on June 10.

Nintendo launched its next-generation console, the Wii U, last year and has said it will not host a major press conference at the event.