Home Health Angelina Jolie double mastectomy: How she kept a normal life for her...

Angelina Jolie underwent a double mastectomy after learning she had an 87% chance of contracting breast cancer, but despite the stress put on her own body, her main concern was maintaining a sense of normality for her and fiancé Brad Pitt’s six children.

A source has revealed that Angelina Jolie, 37, did everything within her power to ensure the couple’s children, Maddox, 11, Pax, 9, Zahara, 8, Shiloh, 6, and 4-year-old twins Knox and Vivienne, led normal lives as their mother underwent three months of secret operations.

The source told People.com: “Things have appeared normal. The kids have kept their schedules as usual. They have been in school during the day and have attended after-school activities like they always do.”

Angelina Jolie made the brave decision to have the procedure after doctors told her she was a carrier of the BRCA1 cancer gene.

The news was made all the more personal by the fact that Angelina Jolie lost her mother Marcheline Bertrand to ovarian cancer when she was just 56.

Revealing her decision to have the surgery in the New York Times, Angelina Jolie said it was the support of her six children and fiancé Brad Pitt which got her through the three months of secret procedures. 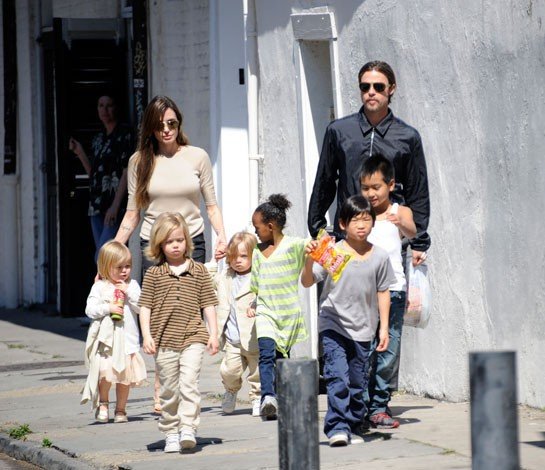 In the editorial piece in the New York Times entitled My Medical Choice, Angelina Jolie wrote: “I am fortunate to have a partner, Brad Pitt, who is so loving and supportive. So to anyone who has a wife or girlfriend going through this, know that you are a very important part of the transition. Brad was at the Pink Lotus Breast Center, where I was treated, for every minute of the surgeries.

In a statement to London’s Evening Standard, Brad Pitt said: “Having witnessed this decision firsthand, I find Angie’s choice, as well as so many others like her, absolutely heroic. I thank our medical team for their care and focus.

“All I want for is for her to have a long and healthy life, with myself and our children. This is a happy day for our family.”

Angelina Jolie also revealed she is proud of her children for being so brave during her operations, which began on February 16th with the initial removal, before she had the reconstruction operation on April 20th.

The brave actress writes: “It is reassuring that they see nothing that makes them uncomfortable. They can see my small scars and that’s it. Everything else is just Mommy, the same as she always was. And they know that I love them and will do anything to be with them as long as I can.”

Following the operations, Angelina Jolie’s risk of contracting breast cancer has now dropped to under 5%.