Home World U.S. News Ariel Castro told police he was an addict who could not control...

Ariel Castro told police under interrogation that he was an addict who could not control his impulses.

The news came after prosecutors revealed they will likely seek the death penalty for the Cleveland kidnap suspect if extra charges are filed in relation to the termination of his victim’s pregnancies.

Cuyahoga County Prosecutor Timothy J. McGinty said yesterday that based on the facts of the case, his office intends to seek charges not only for the assaults endured by the victims, but also “each act of aggravated murder he committed by terminating pregnancies”.

Timothy J. McGinty said he would seek charges for each act of violence, rape, kidnapping, assault and “each act of aggravated murder he committed by terminating pregnancies that the offender perpetuated against the hostages during this decade-long ordeal”. 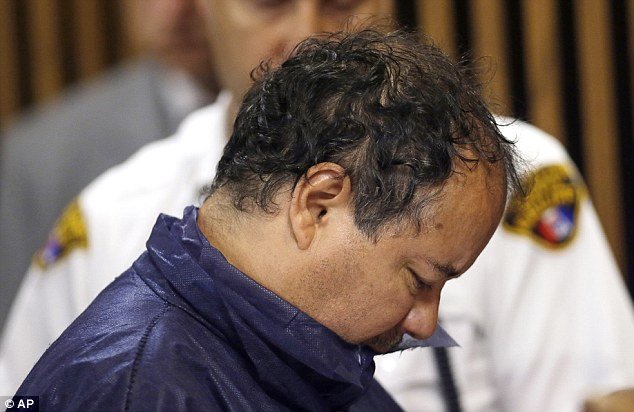 Ariel Castro, 52, hung his head in shame as he made his first court appearance

Ariel Castro, 52, hung his head in shame as he made his first court appearance yesterday morning, the first time he has been seen in public since he was arrested on Monday.

His brothers appeared alongside him but were later released from custody.

Ariel Castro stared at the floor throughout the short hearing at Cleveland Municipal court. He didn’t once glance up to face the packed courtroom from the moment he entered.

Flanked by five guards and wearing a blue prison jump suit, he shuffled into the courtroom alongside his brothers.

Ariel Castro, who is alleged to have kept Michelle Knight, Amanda Berry and Gina DeJesus captive for over a decade, refused to look up at judge Lauren Moore and face the bank of TV cameras inside courtroom three.

He did not speak or acknowledge the judge when she set bond at $8 million.