Park Geun-hye is on her first foreign trip since taking office in February.

Ahead of their meeting, US officials said North Korea had moved two medium-range missiles from a coastal launch site, lowering tensions.

“The days when North Korea could create a crisis and elicit concessions, those days are over,” Barack Obama told Tuesday’s briefing after meeting privately with Park Geun-hye in the Oval Office.

He added: “President Park and myself very much share the view that we are going to maintain a strong deterrent, we’re not going to reward provocative behavior, but we remain open to the prospect of North Korea taking a peaceful path.”

“So far, at least, we haven’t seen actions on the part of the North Koreans that would indicate they’re prepared to move in a different direction,” he said. 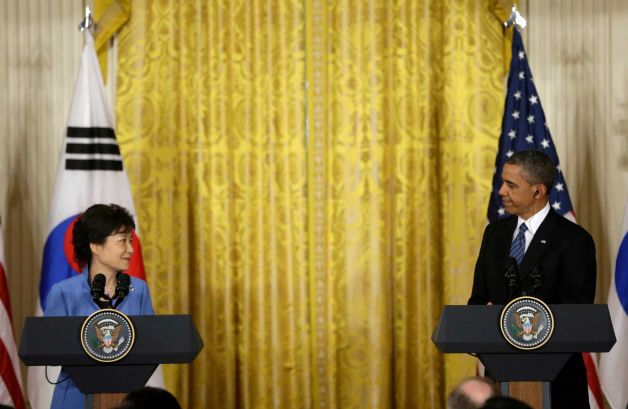 The visit by Park Geun-hye, South Korea’s first female president, came as the US and South Korea mark 60 years of their military alliance.

Park Geun-hye said South Korea would not tolerate what she called North Korean aggression and escalation.

“Instead of just hoping to see North Korea change, the international community must consistently send the message with one voice, to tell them and communicate to them that they have no choice but to change,” she said.

Pyongyang was believed to have been preparing for a missile launch last month, having threatened attacks in the region.

North Korea has also been angered by wide-ranging annual US-South Korea military drills, which ended a week ago.

Meanwhile, the state-owned Bank of China said it was halting transactions from North Korea’s Foreign Trade Bank on Tuesday.

It is thought to be the first time that a Chinese entity has made a move against North Korean interests following the recent tension.