While Peter Stefan’s funeral home in Worcester, Massachusetts, is being protested, the owner says he is desperate for a gravesite as cemeteries all refuse to take Tamerlan Tsarnaev’s body.

However, a determined funeral director charged with burying the body of the Boston bomber says everyone deserves a dignified burial regardless of the circumstances of their death.

Peter Stefan said dozens of protesters have gathered outside the Graham, Putnam& Mahoney Funeral Parlors, upset with his decision to handle the service.

“My problem here is trying to find a gravesite. A lot of people don’t want to do it. They don’t want to be involved with this,” Peter Stefan said.

“I keep bringing up the point of Lee Harvey Oswald, Timothy McVeigh or Ted Bundy. Somebody had to do those, too.”

Every cemetery in Massachusetts has turned down the body of Tamerlan Tsarnaev, Peter Stefan told Fox News, but he remains insistent that this death be handled like any other. It is also understood that Peter Stefan has reached out unsuccessfully to cemeteries in New Jersey and Connecticut.

It was unclear who, if any, among the deceased’s family would step in to ensure the rites – such as the ritual bathing and shrouding of the body – were undertaken according to the religion’s traditions. 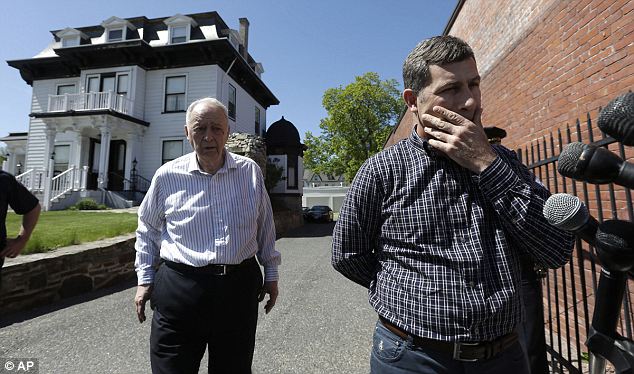 Tamerlan Tsarnaev’s uncle, Ruslan Tsarni, arrived in Worcester from his Maryland home to take care of the burial arrangements

Then, on Sunday, Tamerlan Tsarnaev’s uncle, Ruslan Tsarni, arrived in Worcester from his Maryland home to take care of the arrangements.

“I’m dealing with logistics,” he said.

“A dead person must be buried.”

Ruslan Tsarni and three of his friends met with Peter Stefan Sunday afternoon.

Some picketers believe Tamerlan Tsarnaev should be buried at sea, similar to what was done with the body of Osama bin Laden.

Other protestors simply did not want Tamerlan Tsarnaev’s remains in their town, like retired firefighter Ronald Wahlers.

“It’s going to give this neighborhood a bad name,” Ronald Wahlers, who has lived in Worcester for a year and a half, told the Boston Globe.

Peter Stefan disagrees: “I can’t control the circumstances of somebody’s death, or what they’ve done, or how they’ve died.

“In this country, we bury the dead.”