Home Entertainment Dannielynn Birkhead is the image of her mom Anna Nicole Smith at...

Dannielynn Birkhead was the spitting image of her mother Anna Nicole Smith as she and her father Larry Birkhead attended the 139th Kentucky Derby at Churchill Downs held in Louisville, Kentucky, on Saturday.

Anna Nicole Smith famously stole the show when she attended the Kentucky Derby in May 2004.

Since that moment and her tragic death in 2007, Larry Birkhead has often taken their daughter Dannielynn to the annual horse racing event. 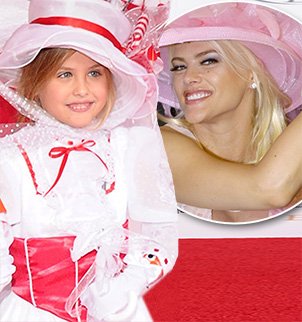 She looked adorable in a white period-style dress with red trim, paired with matching parasol and shoes.

Aside from his light blue bow tie, the rest of his outfit was all white, including his shoes.

Father and daughter held hands as they posed for pictures together on the red carpet, with Dannielynn gazing adoringly at her dad.

They have attended the event together in the past, and last year Dannielynn wore a pretty floral dress and flowers in her hair.

Dannielynn Birkhead is well on her way to getting as confident as her late mother Anna Nicole Smith in front of the camera. She recently appeared in an advertising campaign for Guess Kids.

“Dannielynn has always looked up to her mom’s image and I think that this is kind of Dannielynn’s way of paying tribute to her mom in her own special way,” Larry Birkhead told Good Morning America last November.

The official cause of death was an accidental overdose of nine prescription drugs, including Valium and Atavan.

Daniel Smith died after an accidental overdose of the drug methadone with the antidepressants Lexapro and Zoloft.