Mariah Carey and Nick Cannon renewed their wedding vows by shutting down Disneyland in Anaheim, California, to walk down the aisle for a fifth time in a lavish fairytale-themed ceremony.

Mariah Carey, 43, was transformed into a princess for her special evening, arriving in front of the iconic Magic Kingdom castle in a horse-drawn pumpkin-shaped carriage that wouldn’t have looked out of place in a scene from Cinderella.

Having the opportunity to wear yet another wedding gown, the singer donned a typically over-the-top corseted ivory dress, featuring a dramatic ruffle detail skirt and train.

Wearing her hair swept up into a half beehive, Mariah Carey adorned her head with a glittering diamond tiara, which she teamed with matching earrings and a sparkling necklace. 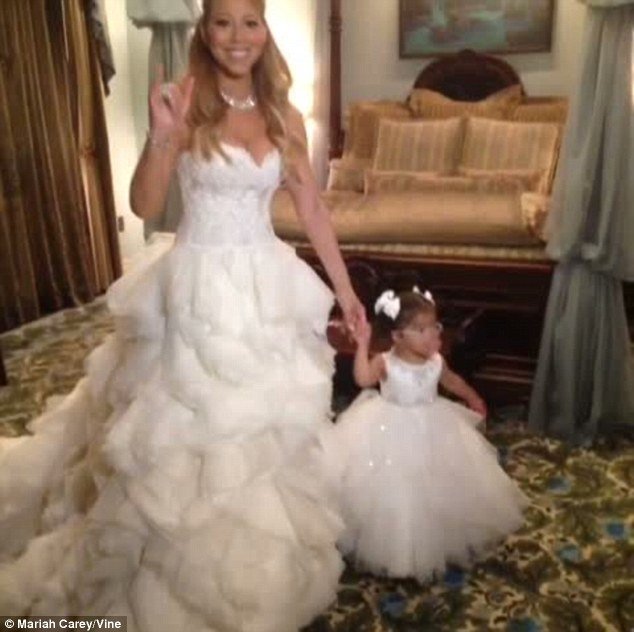 Posting a series of short videos on her Vine page, Mariah Carey could be seen getting ready for her fifth big day alongside her 2-year-old daughter Monroe.

Monroe wore a princess-inspired white gown, which would have no doubt made her the absolute envy of the playground.

Instead of the glittering diamond headpiece her mother was wearing, Monroe had white ribbons in her hair as she joined in the celebrations.

Poking fun at her “diva” reputation, Mariah wrote on her Twitter page: “Slowly making our way to the freezing cold guests #donthatemebecauseimadiva #cinderella.”

Before later adding alongside a video of her and Monroe: “Mommy and princess Monroe.”

Mariah Carey and little Monroe were then seen making their way to the Disneyland ceremony in a giant pumpkin-shaped carriage pulled by two white horses as the visibly emotional star wiped away the tears from her eyes.

She tweeted: “On our way to renew our vows. I love you @NickCannon shut down Disneyland KKLB.”

Nick Cannon – dressed as Cinderella’s Prince Charming – only appeared in the selection of videos very briefly, and was seen holding hands with the couple’s son Moroccan, who was dressed in a mini white tuxedo, as the carriage carrying Mariah and Monroe pulled up.

The picture-perfect family then made their way down the aisle in front of a selection of close friends and relatives as the couple toasted their fifth wedding anniversary in dramatic style.

Mariah Carey and Nick Cannon raised eyebrows when they tied the knot on April 30, 2008, at the singer’s private estate in the Bahamas after just six weeks of dating.

Since then, Mariah Carey and Nick Cannon have renewed their vows in a variety of locations, including Las Vegas, the hospital bed after she gave birth to the twins and most recently, Paris.