This year’s White House Correspondents’ Dinner (WHCD) saw President Barack Obama in pictures with Michelle-style bangs, quipping about Jay-Z and sideswiping at the media and his political foes.

The traditional send-up speech saw the President earn some laughter at his own expense but also land some funny blows against the media and the Republican Party.

Barack Obama opened with a soft joke about his time in office but increasingly moved onto more controversial territory – even joking about “burning books with Michelle Bachmann”.

The president said his advisers said he should stick to the traditional format and make jokes knocking himself down a peg or two.

Barack Obama added: “After four and a half years how many pegs are there left.”

“I still make rookie mistakes,” he told the 3,000 strong audience.

“Like, I’m out in California, we’re at a fundraiser, we’re having a nice time and I happened to mention that Kamala Harris is the best looking attorney general in the country. As you might imagine, I got trouble when I got back home. Who knew Eric Holder was so sensitive?”

“And then there’s the Easter Egg Roll, which is just supposed to be a nice event with the kids. I got out on the basketball court, took 22 shots, made 2 of them. That’s right, 2 hits, 20 misses. The executives at NBC asked, <<What’s your secret?>>.”

Swipes at the media’s expense are traditional fare at the event and Barack Obama seemed to have plenty of material – knocking CNN for mistakes and poking fun at the revolving door between politics and the media.

Referencing campaign adviser David Axelrod and the fact he is now working for MSNBC, he added: “It’s a nice change of pace because MSNBC used to work for David Axelrod.”

The president referenced his likeness to the Satan actor in The History Channel’s show The Bible saying that maybe the channel didn’t attend because they were too embarrassed for associating him with evil.

He then joked: “That never stops Fox News from turning up. They thought that comparison was not fair … to Satan.”

In another media joke, he added: “I remember when Buzzfeed was something I did in college around 2 a.m.”

Barack Obama wasn’t going to spare the chance to throw in a few barbs about the Republicans and their election campaign either.

“One thing [the Republican Party] agrees on is the need to do a better job of reaching out to minorities. And look, call me self-centered, but I can think of one minority they can start with. [Raises his hand] Think of me as a trial run, see how it goes.”

Barack Obama vowed to take his “charm offensive” on the road to “a Texas BBQ with Ted Cruz, a Kentucky bluegrass concert with Rand Paul, and a book burning with Michele Bachmann”.

Addressing his re-election campaign, Barack Obama joked about his rivals attempts to discredit him. 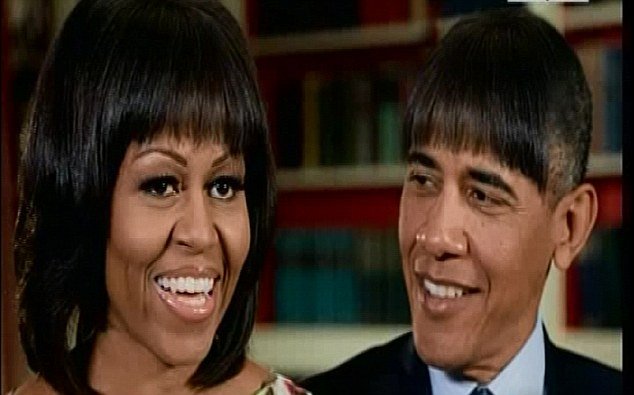 “Did you know that Sheldon Adelson spent $100 million of his own money last year on negative ads? You’ve got to really dislike me to spend that kind of money. I mean, that’s Oprah money. … Sheldon would have been better off offering me $100 million to drop out of the race. I wouldn’t have taken it but I would have thought about it. Michelle would have taken it – you think I’m joking?”

The president made fun about conspiracy theories about his past, joking: “I’m not the strapping young Muslim socialist that I used to be.”
On his appearance, Barack Obama noted his graying hair and also presented a picture of himself photo-shopped with the First Lady’s style bangs.

He said he wanted “a little energy” and a “bit of change” for his second term with the new look.

Another photograph mocked the Bush library, opened earlier this week, and featured the new building alongside a giant “It’s His Fault” sign’.

In the multimedia routine, Steven Spielberg was on-hand to appear in a video mocking a movie on Barack Obama’s legacy.

President Barack Obama then appeared on screen pretending to be the method actor in the role.

In the event which was attacked in recent days for being too celebrity-focused, Barack Obama acknowledged his own controversial celebrity relationships.

“As you all know, the president is hard at work creating jobs,” he joked.

“Since he was first elected, the number of popes has doubled. The number of <<Tonight Show>> hosts has tripled.”

He also leveled a few jokes at the media.

“If HuffPost is here, who’s covering 7 mistakes you’re making with bacon?” he asked.

In a popular topic for ridicule he also mocked CNN, joking: “Tonight’s dinner was halibut and filet, or as John King reported it: Lasagna and couscous.”

“Yes, a lot of online stars are in the room but, unfortunately, Matt Drudge couldn’t make it,” Conan O’Brien said.

“He had a prior commitment to teach a web design class in 1997.”

“Some people say print media is dying, but I don’t believe it,” Conan O’Brien added.

“And neither does my blacksmith.”

“President Obama and John Boehner are kind of like a blind date between Anderson Cooper and Rachel Maddow. In theory, they understand each other’s positions but, deep down, you know nothing’s ever going to happen.”

NBC veteran Tom Brokaw turned down his invite this year claiming the event had become too tabloid.

One of America’s most respected journalists, Tom Brokaw said, it was last year’s appearance of Lindsay Lohan which was the final straw for him.

“The breaking point for me was Lindsay Lohan,” he told Politico on Friday.

“She became a big star at the White House Correspondents’ Dinner. Give me a break.”

The red carpet didn’t seem to disprove his point with dozens of celebrities from a-list to z-list lining up in their finest.

However, Conan O’Brien used the small screen attendees to his benefit.

Imagining the casting of a miniseries on Washington, the comedian ran through a series of potential lookalikes from Bob Barker as Vice President Joe Biden; an Easter Island Head as John Kerry; a Furby as Wolf Blitzer and – with one of the biggest laughs of the night – “tan mom” as Boehner.

The tradition of news outlets bringing stars to join their tables began when the cast of Saturday Night Live was brought down from New York to D.C. in the mid-1970s.

This year, celebrities had an Oscars-worthy parade of glamorous designer dresses and stylish suits on show – making it is as much an event for the fashion pack as the usual politicos.

Leading the perfect combination of the two, Michelle Obama arrived in a sequined black gown while Obama supporter and Vogue editor Anna Wintour opted for a white fur shawl.

Constance Zimmer and Kate Mara, who co-star as reporters in the political series House Of Cards, and Connie Britton, who plays an all-American country singer in Nashville, were some of the stars attending.

The women opted to show their patriotic colors with Constance Zimmer, 42, donning a red floaty frock, Kate Mara, 30, in a white floor-length gown, and Connie Britton, 46, in a blue mermaid-style creation.

It wasn’t only female celebrities invited along for the ride, Piers Morgan brought Gerald Butler along as his plus 1.

“Just had my fitting with @Stephendatailor – my awesome go to tailor in DC! – getting EXCITED about tonight. #whcd,” tweeted Kerry Washington earlier in the day.

However, excited celebrities weren’t the only ones taking to Twitter to make their feelings known about the events.

Sarah Palin tweeted: “That WHCD was pathetic. The rest of America is out there working our asses off while these DC assclowns throw themselves a nerd prom.”