Kourtney Kardashian kicked Kim out of their Miami mansion and threw her clothes into the street after it was revealed the pregnant star hired a private detective to spy on Scott Disick.

Kim Kardashian hired the private detective to put a tracking device on Scott Disick’s car, check his phone records and take pictures of him partying and she thought he was “acting shady”. 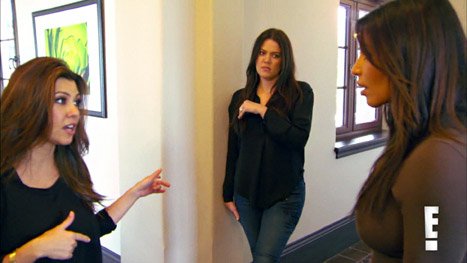 But Kourtney Kardashian did not take Kim’s meddling well.

“Seriously how dare you get involved in my family and try to rake things up. Hiring a private investigator to follow Scott?” she said.

“It is not okay to come into my life and get involved.”

“Would Kim be happy if she broke up a family? That’s what I don’t get,” he said.

“It doesn’t surprise me that Kim hired a private investigator, she has done this before in her past relationships but for somebody that I love and trust have someone follow me? I have never felt more betrayed or upset.

“This is an all-time low.

“I feel like I have always been there for Kim but after this I do not want her around and obviously she does not want me around.”

Kourtney Kardashian had to eventually admit she understood some of Kim’s actions.

“Who knows what you are up to?” she asked Scott Disick.

“I do think it is invasive and wrong, but why can’t you be normal. If you want to get a drink with a friend then come home at a normal hour.”

But Scott Disick answered that if he went for a drink he would be out partying for two days.

“Do you think that is fun for me?” said Kourtney Kardashian.

Kim Kardashian realized she had upset her older sister but defended her actions.

“I did not want Kourtney to find out like this. I know she does not understand it now but I am just trying to protect her and her whole family,” she said.

The finale also saw Kim Kardashian reveal to her sisters that she is pregnant with boyfriend Kanye West’s baby.