The Minuteman III ICBM test was put off over concerns it could be misinterpreted by North Korea, amid fears of a conflict.

The test could be postponed till May, in what correspondents say will be portrayed by Pyongyang as a victory.

North Korea has issued a series of unusually strong threats since it was sanctioned by the UN in March for carrying out a third nuclear test. 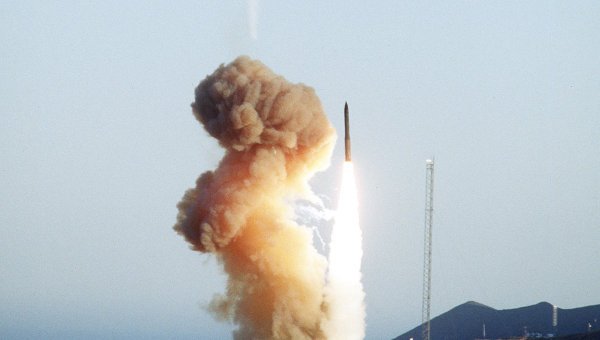 The Minuteman III ICBM test was put off over concerns it could be misinterpreted by North Korea, amid fears of a conflict

The communist country has threatened nuclear strikes on the US, formally declared war on South Korea, and pledged to reopen a nuclear reactor in defiance of UN Security Council resolutions.

A Pentagon official said the US wanted to “avoid any misperception or miscalculation” that might result from the Minuteman 3 test.

Pyongyang will likely use the delay to its advantage in propaganda, and say the US has been forced to climb down in the face of resilience from the North Korean army.

The North Korean media are full of images of military preparedness intended to rally people behind the leadership.

On Friday, North Korea warned it would not be able to guarantee the safety of embassy staff in the event of a war, but no foreign governments have announced plans to evacuate their embassies.

Many of North Korea’s angry statements have cited annual military exercises between US and South Korean forces as provocation.

This week, North Korea reportedly moved at least one missile to its east coast. It has threatened to strike the Pacific island of Guam, where the US has a military base.

North Korea’s missiles have the capability to carry nuclear warheads, but the country is not yet thought to have developed such warheads.

Many observers say that North Korea’s belligerent rhetoric appears intended for a domestic audience and at shoring up the position of Kim Jong-un, who came to power after his father’s death in December 2011.