The 911 call from Buckwild star Shain Gandee’s friend, who found his dead body in an SUV with two others after they died from carbon monoxide poisoning, has been released.

Shain Gandee’s friend tells the 911 dispatcher they have been looking for the men for two days and explains their car is stuck in the mud.

The 3-minute tape, which was obtained by TMZ, captures the frantic moment the caller realizes that his friend is dead.

He starts off quite upset but reasonably calm but as the call goes on, he becomes more frustrated before eventually breaking down and sobbing uncontrollably after the dispatcher asks him who is in the car. 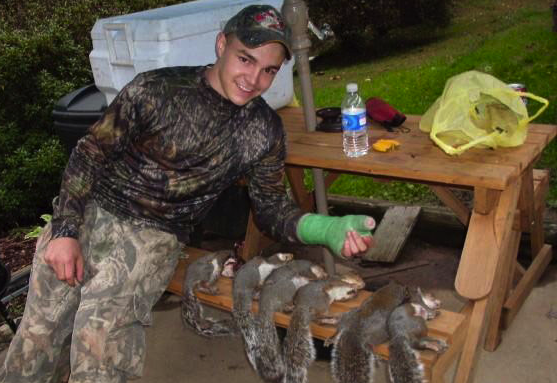 Meanwhile, Parallel Entertainment and Zoo Productions – who produce MTV reality show Buckwild – announced yesterday they would pay for all of Shain Gandee’s funeral expenses ahead of his funeral on Sunday.

An autopsy confirmed that Shain Gandee and two other men – his uncle David Gandee, 48, and Donald Robert Myers, 27 – died of carbon monoxide poisoning after the SUV they were riding in became partially submerged in deep mud.

“I have an emergency I have three dead people on top of Sol Lane. They were missing persons…Gandee.

“We are up on a hill, they are up in a hill in a mud hole in their Bronco, we have been looking for them for two days, oh my god, oh my god…

“All three are inside the vehicle. It’s David Gandee and Shain Gandee (sobs).”

“Does it look like someone has done anything to them? They’re definitely not breathing?”

“You don’t see any drugs or anything?”

“No…They’ve been missing since Saturday.”