Heidi Agan, a 32 year-old single mother-of-two, now has a “bump made in various sizes”.

She quit her job at a Kettering restaurant last May after customers repeatedly said she looked like Kate Middleton.

Heidi Agan now travels across the UK and around the world to make appearances as a royal doppelganger.

“To have done 12 years of something you know and then to leap into an industry that gives with one hand and takes with another is difficult, but I’m just really happy and feel blessed that I did,” Heidi Agan said.

Since the Duchess of Cambridge and Prince William announced their forthcoming baby, lookalike Heidi Agan has now prepared to appear with child.

“As Kate grows I will too – to be authentic I thought it was important,” she said.

“It’s difficult at the moment as she’s not big enough yet to change her entire wardrobe so it’s difficult to see how she’s’ going to dress it.” 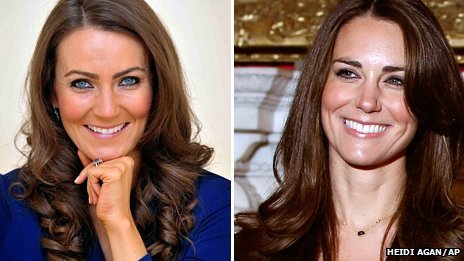 Since taking the showbiz plunge Heidi Agan has made regular television, radio, corporate and newspaper appearances as the duchess.

“I did the Alan Titchmarsh Show and everywhere you turned there was another celebrity,” Heidi said.

“You just have to pinch yourself as I can’t believe it’s happened.

“It was the same in New York. I went to Times Square with Good Morning America and was ferried around with security.

“It’s just something I never thought would happen to me, but has turned out to be the most wonderful thing ever.”

Heidi Agan follows social media news about Kate Middleton to ensure her own wardrobe matches the duchess’, and practices “her look” daily.

“The most expensive shoes I’ve bought as Kate were about £200, the dress was about £300 – which I don’t think is that bad considering her original evening wedding dress by Alexander McQueen would have cost tens of thousands of pounds.

“I have to get the clothes, the mannerisms, the way she stands and interacts with William right. Things like that are all very important if I want to be the best.”

Heidi Agan said her children, aged 11 and 4, are “proud” of what she’s doing.

“It’s just been incredible and I feel so blessed with it and without the support of my family I just couldn’t do it,” she said.

“Appearing as Kate has given me the opportunity to spend more time with my own children than if I was doing my waitressing job and that’s priceless.”

Heidi Agan refused to be drawn on who she found most attractive between the royal brothers.

“I don’t think either William or Harry are my type, they are too tall… is that diplomatic enough?” she said.

People in Corby were treated to a “royal appearance” on Saturday when Heidi Agan appeared for an event in the town’s Corporation Street.