As Syria marks two years since the start of the nation’s unrest, the EU is set to discuss lifting its arms embargo to allow supplying rebels.

The leaders of France and Britain will try to push other EU members to agree to the move at the Brussels summit.

Ties with Russia, one of Syria’s key allies, will also be discussed. Moscow strongly opposes arming the rebels.

Up to 70,000 people have been killed in Syria since the uprising against President Bashar al-Assad began.

About one million people have fled the country.

To mark the anniversary, the International Committee of the Red Cross urged world leaders to put pressure on both sides to stop attacks on civilians.

“It is deplorable that high numbers of civilian casualties are now a daily occurrence,” said Robert Mardini, who heads ICRC operations in the Middle East.

“These ongoing violations of international humanitarian law and of basic humanitarian principles by all sides must stop.” 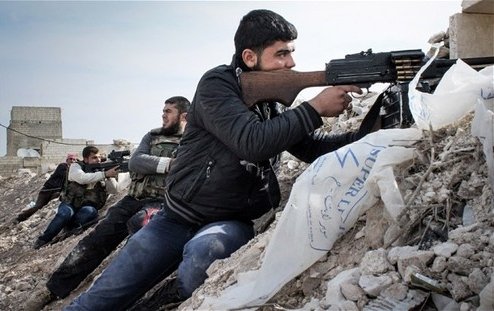 The unrest began on March 15, 2011, with nationwide protests following arrests in the southern city of Deraa.Rebels now control large sections of Syria, but the conflict has appeared to be largely in stalemate for months.

A number of vigils have already been held around the world to mark the second anniversary of the conflict, including in the South Korean capital, Seoul, and in Amman in Jordan, where children gathered in front of the Citadel for an event organized by Save the Children.

France’s President Francois Hollande and UK PM David Cameron are expected on Friday to raise the issue of the arms embargo at the talks in Brussels, although Syria is not a formal agenda item.

Speaking on Thursday, Francois Hollande said that Paris was “ready to support the rebels”.

“We cannot allow the massacre of a people by a regime which right now does not want a political transition.

“France’s view is that arms are being delivered to Syria – but to the regime of Bashar, in particular by the Russians,” he said.

But the French president stressed that his aim was not a “total war”.