Oscars 2013, hosted by Seth MacFarlane, attracted a TV audience of 40.3 million, a million more than tuned in to 2012’s broadcast.

According to the ABC network, the show – hosted by Seth MacFarlane, creator of hit TV cartoon Family Guy – drew the largest Oscar audience for three years.

Argo won best picture at this year’s event, while Daniel Day-Lewis was named best actor for a record third time.

According to statistics company Nielsen, Seth MacFarlane’s involvement helped boost interest among young men and the 18- to 49-year-old age group.

Figures for the latter demographic, which is much coveted by TV advertisers, were up 11% on last year, while the 18- to 34-year-old male audience saw a 34% increase.

Reaction to Seth MacFarlane’s performance has been mixed, with Rolling Stone saying he resembled a “bumbling rookie” in his first stab at Oscar host.

The New Yorker was no less scathing, saying that watching the three-and-a-half hour ceremony “meant sitting through a series of crudely sexist antics”. 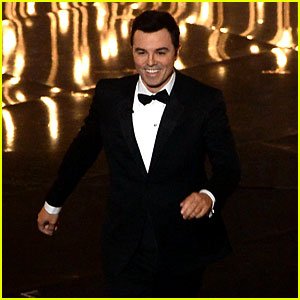 Oscars 2013, hosted by Seth MacFarlane, attracted a TV audience of 40.3 million, a million more than tuned in to 2012’s broadcast

Satirical website The Onion also found itself under fire on Sunday after calling Quvenzhane Wallis, the 9-year-old star of Beasts of the Southern Wild, a “crude and offensive” name on Twitter.

Steve Hannah, the website’s chief executive, apologized to the best actress nominee, saying that “no person should be subjected to such a senseless, humorless comment masquerading as satire”.

It has also emerged that an Oscar-winning producer was briefly ejected from Sunday’s star-studded ceremony for throwing paper airplanes around the auditorium.

According to the Hollywood Reporter, security staff at Hollywood’s Dolby Theatre took issue with Kristina Reed for recreating the action of Paperman, this year’s best animated short.

Life of Pi took home the most awards on Sunday, winning four prizes including a best director accolade for Taiwan’s Ang Lee.