Shoe designer Manolo Blahnik has admitted that he is unclear who Anne Hathaway is.

Manolo Blahnik, 70, told Interview magazine: “Anne Hathaway… Pretty? Yes. Wonderful actress? Yes. But, I mean, I don’t even remember her. What is it about her?”

The shoe designer then went on to slam the Oscar nominee’s Les Miserables co-star, Amanda Seyfried, as equally forgettable.

“I don’t even know Amanda Seyfried or whatever – they’re all the same!” he said.

The interviewer tried to jog Manolo Blahnik’s memory of Anne Hathaway, reminding him that the actress was “very good as Cat Woman in The Dark Knight Rises”.

Manolo Blahnik responded: “As Cat Woman, yes, and I’m not saying she’s not beautiful or a great actress.”

He then added dismissively: “I just don’t remember her.” 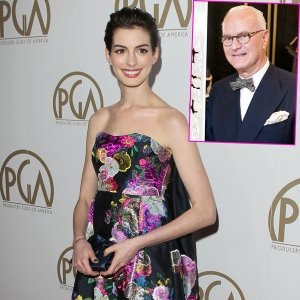 Indeed, it seems Manol Blahnik only has admiration for a specific type of contemporary actress.

“The only one I remember is Julia Roberts because she’s particular,” he told the interviewer.

According to him, Twin Peaks stars, Lara Flynn Boyle and Sherilyn Fenn, are “old-school girls like Elizabeth Taylor”.

“[They] should be working now instead of these anonymous girls.”

Manolo Blahnik also recalled being captivated after bumping into Salma Hayek at an awards show when he was feeling unwell.

“I was waiting to be photographed,” he recounts.

“And I almost fainted on that girl, the tiny woman from France, no, from Mexico… Salma Hayek.”

Salma Hayek’s good looks and glamour clearly made an impression on the designer.

“I love that. This is what I really love: Where are those girls?” Manolo Blahnik wondered aloud.

Anne Hathaway has been nominated for an Oscar for her role in Les Miserables.