Crime writer Patricia Cornwell has won a $51 million lawsuit against her former financial managers, after a jury agreed their negligence cost her millions in losses.

A lawyer for Anchin, Block and Anchin LLP insisted the firm had acted “professionally and appropriately”.

The firm blamed Patricia Cornwell’s losses on the recent recession and on her supposedly extravagant spending habits.

In a lawsuit in federal court in Massachusetts, Patricia Cornwell said that in 2009 she discovered her net worth was less than $13 million, even though she had made an eight-figure annual income for the previous four years.

Patricia Cornwell found out “that Anchin had borrowed on [her] behalf collectively several million dollars, comprised of mortgages for real property and a loan for the purchase of a helicopter,” she argued in court documents.

She also accused her financial managers of failing to arrange temporary accommodation for her when renovation on her home took longer than expected.

The lawsuit added that because Patricia Cornwell suffered from bipolar disorder – a condition she says her business managers were aware of – the author’s “ability to write is dependent upon the ability to avoid distractions”.

“A quiet, uninterrupted environment, free of the distractions of managing her business and her assets, including her investments, is essential to her ability to write and to meet her deadlines,” it says. 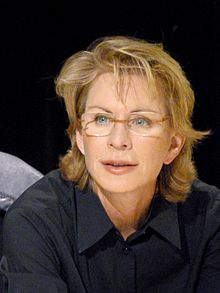 Crime writer Patricia Cornwell has won a $51 million lawsuit against her former financial managers, after a jury agreed their negligence cost her millions in losses

Patricia Cornwell said that as a result of the disruption she missed a book deadline for the first time in her career.

“This was very destabilizing. I really lost my ability to focus and concentrate. I did not know what the book was about anymore,” Patricia Cornwell said, according to the Associated Press.

In a lawsuit, Patricia Cornwell said the missed deadline cost her about $15 million – a year of income – in book advances and commissions that could not be recovered.

“It’s a huge relief and it’s been a huge ordeal.”

Anchin, Block and Anchin described Patricia Cornwell as a demanding client who would use the firm for everything from arranging care for her mother to taking her clothes to the tailor.

“I did not steal any money from anyone,” he said.

“The money was there.”

James Campbell, an attorney for the defendants, said the firm was considering appealing against the verdict.

“We continue to believe the firm acted professionally and appropriately,” he told the Boston Globe.

“For more than 90 years, the professionals at Anchin have built a reputation for honesty and integrity. The firm will endure in spite of today’s outcome.”