A South African court heard today that boxes of “steroids, testosterone” and needles were found at Oscar Pistorius’ home where he shot girlfriend Reeva Steenkamp dead after “non-stop” arguing.

The details were revealed by the prosecution on the second day of Oscar Pistorius’ bail hearing at Pretoria Magistrates’ Court where he faces a charge of premeditated murder.

Oscar Pistorius, 26, sobbed with his head lowered as the packed court heard the post-mortem showed three entrance wounds – the bullets hit the right side of Reeva Steenkamp’s head, her right elbow – which resulted in a broken arm – and her hip.

He claimed it was dark when he shot Reeva Steenkamp, but today police claimed a witness heard gunshots, saw the lights on, heard “a female screaming” and then more shots.

Chief investigating officer Hilton Botha told the packed court a separate witness said they heard an hour-long fight between 2 a.m. and 3 a.m. before the sound of gunshots rang out.

Hilton Botha said he arrived at the upscale Pretoria house at about 4.15 a.m. last Thursday and Reeva Steenkamp, 29, had already been declared dead – “she had on white shorts and black vest. She was covered in towels”.

Oscar Pistorius, who underwent below-the-knee amputations when he was 11 months old, said he shot through the toilet cubicle door while on his stumps but the court heard the bullets’ trajectory was through the top of the door.

Hilton Botha said he believed the bullets were fired down, suggesting that Oscar Pistorius was wearing his prosthetic legs when the shots were discharged.

Gerrie Nel, the chief prosecutor asked Hilton Botha if the shots were fired directly at the toilet basin and he agreed.

“If you fire straight at the door, you miss the toilet,” he explained.

He said that one bullet cartridge was found outside bathroom while three others were inside.

On the shower mat in the en-suite bathroom laid a firearm and an iPhone 4 and iPhone – Hilton Botha said four phones in total were found in the athlete’s home and none of them had been used to call emergency services.

The presiding magistrate heard that testosterone and needles were found in Oscar Pistorius’ bedroom. 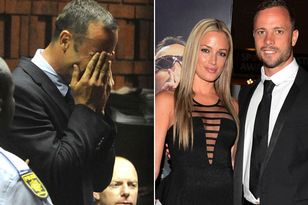 Boxes of steroids, testosterone and needles were found at Oscar Pistorius’ home where he shot girlfriend Reeva Steenkamp dead after non-stop arguing

The court heard police found a box of .38 calibre ammunition rounds in a bedroom safe for which Oscar Pistorius is not a licence holder – they plan to charge him with possession of unlicensed ammunition.

In the bedroom they found an overnight bag was on a couch on the left hand side of the bed as well as slippers.

Oscar Pistorius has said he had been a victim of crime and received death threats, but today the court heard there were no records of this.

The athlete made notes with a silver pen as the case progressed.

Hilton Botha said he believed Oscar Pistorius, who won two gold medals and a silver at London’s 2012 Paralympic Games, was a flight risk and he was opposing bail.

Discussing extradition he said: “We don’t want another Dewani to happen. We’re still waiting to get him back in the country.”

He was referring to Shrien Dewani who is wanted in South Africa over the honeymoon murder of his wife in November 2010, but is now fighting extradition in Britain.

The defence will have to prove the extenuating circumstances that would justify granting bail so Oscar Pistorius will be free until the trial starts.

It is not expected to begin for at least four months – it would be heard by a judge sitting alongside two assessors – typically magistrates or retired magistrates – as the South Africa legal system does not have a jury system.

At today’s hearing it was claimed Oscar Pistorius was involved in another shooting at a restaurant in Johannesburg in January and asked the gun owner to take responsibility for the incident.

Hilton Botha also told the court of an incident at Kyalami racetrack where Oscar Pistorius allegedly threatened to “f*** up” a man during a row over a girl.

The court gasped and the magistrate was forced to call for order after Barry Roux revealed that the witness who allegedly heard the screaming lived 600 metres away.

Barry Roux said there was no sign of an assault or a struggle on Reeva Steenkamp.

He told the court it was not testosterone, but a herbal remedy discovered in his client’s bedroom.

Barry Roux said a post-mortem examination showed Reeva Steenkamp’s bladder was empty and said that was consistent with her getting up at 3 a.m. to go to the toilet.

He asked repeatedly why the police did not make simple checks – over the lighting and whether Oscar Pistorius had other phones.

The lawyer said Oscar Pistorius phoned the housing complex manager for help at 3.19 a.m. then Netcare hospital a minute later.

Barry Roux said the police discarded anything that might have been consistent with a defence.

Yesterday Oscar Pistorius he mistook Reeva Steenkamp for an intruder and shot her through the locked door of a toilet in his mansion home.

He said he thought she was in his bed when he opened fire.

“I kicked the door open, I tried to help her but she died in my arms,” he said in his first account of what happened.