Taylan K, the Turkish man accused earlier yesterday of having a secret affair with Sarai Sierra, the New York mother who was bludgeoned to death during a solo trip to Istanbul last week, has denied the claims, insisting they were just friends who met up for a cup of tea.

Sarai Sierra, 33, from Staten Island, was said to have met a man named as “Taylan K” on Instagram a few months ago before her trip to Turkey and then met up with him several times while she was there.

Various Turkish media reports claimed they had sex in a bar restroom the night before Sarai Sierra was murdered but that was the last time he had seen her.

Police said he was not a suspect.

Ozkan Polat insists the pair had “no emotional relationship” and had met for a cup of tea as friends, adding that his client comes from a “good family and completed a master’s program abroad…He’s very demoralized”.

The claims come one day after the body of Sarai Sierra arrived at her home in Staten Island. Her devastated husband Steven Sierra and two children, aged 9 and 11, are preparing for her wake and funeral on February 15.

It was also revealed on Friday that two Iranian women are among the 46 people being held over the murder.

Turkish police took DNA samples from 22 people – none of which matched the crime scene – and are questioning a number of others.

They said there is a possibility Sarai Sierra fought against her attacker and left traces of the killer on her skin or under her fingernails. 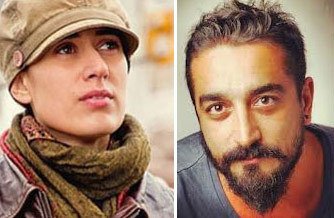 Taylan K has denied having an affair with Sarai Sierra, insisting they were just friends who met up for a cup of tea

As well as being bludgeoned over the head, Sarai Sierra had extensive trauma to her torso, her right hip area and bruises on her arms, suggesting a struggle.

Istanbul authorities say the area where Sarai Sierra was murdered is a known rape black spot in a run down part of the city.

A Swedish tourist was raped at knife point in the same place in January 2007, and in March 2010 a Japanese girl suffered a chillingly similar attack to Sarai Sierra’s murder when she was bludgeoned about the head with a rock and raped, according to Turkish daily newspaper Takvim.

Another 24-year-old Turkish girl was attacked at knife point at the same spot but managed to fight off her attacker and flee to safety.

Since those attacks, Turkish police have installed extra lighting and CCTV in the area in a clearly-failed attempt to make it safer.

Taylan K has denied wrongdoing and said he met Sarai Sierra on January 10 for the first time in Istanbul but he did not see her again until January 20 when she wrote to him: “I want to see you.”

The next day Taylan K missed two messages from her in the morning and when he tried to call, her phone was off.

Ozkan Polat told the New York Daily News that his client and Sarai Sierra made plans to meet again – near the Galata Bridge in Istanbul before her death. But she never showed up.

State Prosecutor Huseyin Kaplan said Taylan K is not being considered as a suspect and authorities aren’t concerned about their alleged affair.

“We’re not interested in whether she had a sexual relationship,” Huseyin Kaplan told the Daily News.

“What’s important for us is who killed her.”

It was also reported that police are questioning a drug dealer and hostel owner in the area where Sarai Sierra’s body was found after checking her phone and Gmail records.

The family will gather on February 15 at Christian Pentecostal Church, where Sarai and Steven had met, for Sarai Sierra’s funeral.

Sarai Sierra’s wake will take place on Valentine’s Day – which would have been the couple’s 15th wedding anniversary.