Rio annual carnival has kicked off in Brazil, but the parades and street parties have a sombre tinge coming after a nightclub fire that killed 238 people.

Mourning rituals continued as the mayor of Rio de Janeiro handed over the keys of the city to carnival ceremonial figurehead King Momo.

She is not taking part in the five-day party, spending it in Bahia state.

More than 60 casualties of the inferno remain in hospital, and many cities – particularly near the southern city of Santa Maria where the fire happened – have scaled down their festivities as a result.

For Brazil, Rio Carnival 2013 is an important test of the city’s infrastructure ahead of the big sporting events lined up for the future, including the World Cup in 2014 and the Olympics in 2016.

Streets in Rio, where festivities kick off on Saturday, were already crowded on Friday with thousands of people, following more spontaneous street parades.

This year, more than 700 processions will make their way through various parts of the city, with US actress Megan Fox among the international celebrities expected to take part. 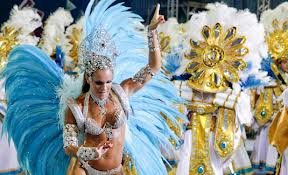 Rio annual carnival has kicked off in Brazil, but the parades and street parties have a sombre tinge coming after a nightclub fire that killed 238 people

The carnival is set to draw 1.1 million tourists to Rio, generating some $650 million for the local economy. Hotels and restaurants are booked almost to capacity.

South Korean pop phenomenon PSY – whose trademark Gangnam Style dance mimicking trotting on a horse, holding the reins and spinning a lasso has made him a household name – will perform during the street parties in Brazil’s third largest city, Salvador.

From Sunday, Samba schools compete with each other at spectacular parades in special stadiums known as sambadromes – with elaborately decorated floats and dancers wearing multicolored costumes often adorned with large feathers.