Austrian daredevil Felix Baumgartner fell has been proved to be even faster during his historic skydive last October than was originally thought.

Subsequent analysis has revealed that Felix Baumgartner attained a speed of 1,357.6 km/h (843.6 mph) when he leapt from his stratospheric balloon.

Felix Baumgartner’s stated aim was to become the first person to break the sound barrier unaided by a vehicle. This he did. His final Mach number was 1.25.

But although his vertical velocity has been revised upwards, the 43-year-old’s jump altitude has been corrected downwards slightly.

Felix Baumgartner’s “space jump” was made over the New Mexico desert, US, on October 14. Millions across the world followed his progress on internet video feeds as he climbed slowly into the sky in his 55-storey-high helium balloon, before making a rapid, 10-minute descent to Earth, with just under five of those minutes spent in freefall.

The biggest moment of drama came when he went into a spin as he hurtled towards the ground, turning at a maximum rate of 60 revolutions per minute.

He had to use all the skills picked up in more than 2,500 career skydives to recover a stable configuration and complete the dive safely.

Joe Kittinger, now an octogenarian, was integral to Felix Baumgartner’s team, providing the Austrian with advice and encouragement throughout the project. 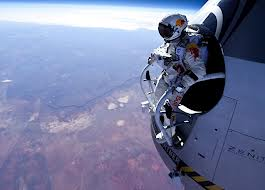 Although the jump had the appearance of a stunt, Felix Baumgartner and his group of experts continually stressed its high scientific relevance.

The researchers said it provided invaluable data for the development of high-performance, high-altitude parachute systems, and that the lessons learned would inform the development of new ideas for emergency evacuation from vehicles, such as spacecraft, passing through the stratosphere.

“Together, we proved that a human in freefall can break the speed of sound returning from near space, going through a transonic phase and landing safely on the ground,” said Dr. Jonathan Clark, a former space shuttle flight surgeon and the Red Bull Stratos medical director.

“That was a big part of the programme, and monitoring the mission was a meaningful event in aerospace medicine and physiology.”

The revised data will now be submitted to the Federation Aeronautique Internationale (FAI), the official world body that oversees these types of records:

*without drogue or stabilization device