British make-up artist Stuart Freeborn, who was renowned for his contributions to 2001: A Space Odyssey and the Star Wars films, has died at the age of 98.

One of his most famous creations was Yoda, the diminutive Jedi master first seen in 1980’s The Empire Strikes Back.

Stuart Freeborn based Yoda’s look on Albert Einstein, as well as his own features.

Born in 1914 in Leytonstone, east London, the young Stuart Freeborn resisted his insurance broker father’s attempts to have him follow in his footsteps.

Stuart Freeborn began his film career at the Denham studios in the 1930s, where he worked under the auspices of Alexander Korda.

“I never stopped from that moment,” said the make-up artist, who soon found himself working with such leading stars of the day as Marlene Dietrich and Vivien Leigh.

When war broke out in 1939, Stuart Freeborn temporarily gave up his fledgling career to train as a fighter pilot, only to almost lose his life to Asian flu and haemophilia.

The war years saw him work on the prosthetics used to transform Roger Livesey into a balding, pot-bellied blusterer in The Life and Death of Colonel Blimp. 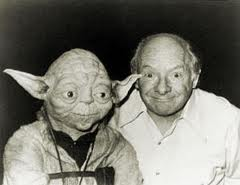 British make-up artist Stuart Freeborn, who was renowned for his contributions to 2001: A Space Odyssey and the Star Wars films, has died at the age of 98

Another notable success came in 1948 when he devised the make-up that Alec Guinness used to portray Fagin in David Lean’s film of Charles Dickens’ Oliver Twist.

With its large beaked nose, hooded eyelids and extravagant facial hair, the characterization was accused by some of being an anti-Semitic caricature.

Stuart Freeborn continued working with Sir David Lean, travelling with him to Sri Lanka for the filming of his 1957 war epic The Bridge on the River Kwai.

The shoot was a dramatic one for the make-up artist, who almost perished in a car accident that claimed the lives of his fellow passengers.

That led to him designing the apes seen in the Dawn of Man sequence of 2001: A Space Odyssey, a laborious two-year process that at one stage saw comedian Ronnie Corbett participate in make-up tests.

The 1970s saw Stuart Freeborn make a vital contribution to the Star Wars universe, for which he helped create such enduring characters as Chewbacca, Jabba the Hutt and Yoda.

Stuart Freeborn’s son Graham became a make-up artist in his own right, working alongside his father on the Star Wars and Superman films.

Stuart Freeborn’s death was confirmed by Nick Maley, a family friend who worked as his assistant in the 1970s.