Royal Bank of Scotland (RBS) is expected to be fined a total of about £400 million ($625 million) by UK and US regulators as a result of the LIBOR scandal.

The head of RBS’s investment banking arm since 2008, John Hourican, is also expected to step down.

However, there is no suggestion he was involved in the scandal.

RBS is accused of colluding with other banks to rig LIBOR rates during the global financial crisis. Barclays and UBS have already received fines.

Business Secretary Vince Cable said the UK government had made it clear to RBS that the fines should be paid from staff bonuses, saying that neither taxpayers nor bank customers should bear the cost.

The government has an 81% stake in RBS following the part-nationalization of the bank during the financial crisis.

“The problem is that these are global banks and if they’ve committed breaches of the law in the US they have to be punished accordingly,” said Vince Cable.

“It is absolutely galling for UK taxpayers to be asked to stump up for it.”

But he acknowledged that the government could not force RBS to act, despite its majority stake. 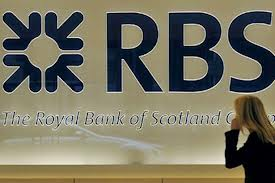 In a statement released on Wednesday morning, RBS said it was still in “late-stage settlement discussions” with US and UK authorities over “potential settlements”.

“Although the settlements remain to be agreed, RBS expects they will include the payment of significant penalties as well as certain other sanctions,” the bank said.

Those discussions are taking place with the Financial Services Authority in the UK, the US Commodity Futures Trading Commission and the US Department of Justice.

The greater proportion of the fines are expected to be imposed by the US authorities.

Swiss bank UBS admitted to wire fraud charges against its Tokyo office as part of its £940m settlement with international regulators in December.

Barclays, the first bank to admit to its role in rigging LIBOR, paid a total of £290 million ($460 million).

John Hourican, who earned £3.5 million ($5.5 million) for last year’s work, is expected to lose his bonus for 2012 along with his position as head of RBS’s investment bank. He is also expected to forego £4 million ($6 million) of bonuses from previous years, in order to help pay the expected fines.

John Hourican is the highest profile casualty at the bank since it emerged last year that dozens of bankers had willfully manipulated the key interest rate.

LIBOR, a daily average of borrowing costs announced by a panel of London-based banks, is used to calculate payments on hundreds of trillions of dollars-worth of financial contracts.