Home World Europe News Malala Yousafzai: Malala Fund set up to help all children get an...

Malala Yousafzai, the Pakistani schoolgirl who was shot in the head by the Taliban last year, has spoken for the first time describing how a fund has been set up in her name to help all children get an education.

Malala Yousafzai, 15, was speaking in an interview recorded before surgery at a Birmingham hospital on Saturday.

She was shot on a school bus in October in Pakistan by the Taliban after campaigning for girls’ rights.

A bullet was removed from her head by surgeons in Pakistan, before she was flown to the UK for further treatment.

Malala Yousafzai was discharged as an inpatient from Queen Elizabeth Hospital in January and underwent a five-hour operation at the weekend to fit a titanium plate over her damaged skull.

She also had a cochlear implant fitted to deal with some deafness caused by her injuries.

Speaking in the video in English, Malala Yousafzai said she wanted to “serve the people”.

She said: “Today you can see that I’m alive. I can speak, I can see you, I can see everyone and today I can speak and I’m getting better day by day.

“It’s just because of the prayers of people, because all the people – men, women, children – all of them have prayed for me.

“Because of these prayers, God has given me this new life and this is a second life.

“I want to serve the people and I want every girl, every child, to be educated and for that reason we have organized the Malala Fund.”

She also made her comments in Urdu and Pashtu. 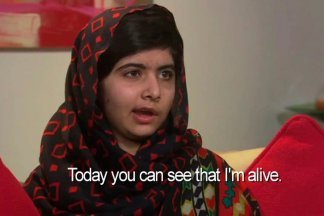 The Taliban said it attacked the campaigner for girls’ education for “promoting secularism”.

The first grant from the Malala Fund will go to an organization in the teenager’s home region of the Swat Valley in Pakistan and it aims to encourage girls to go to school instead of going straight into work.

Those behind the project said it would help enroll selected girls into schools and give them the support to continue with their studies.

It is also expected to work with families to understand the importance of education for their daughters.

The Malala Fund has been set up by international organization Vital Voices, which says it helps give women a voice to promote prosperity and peace in their communities.

A message on the organization’s website said: “We established the Malala Fund on behalf of Malala and her family, working together with supporters of the cause, including the United Nations Foundation and Girl Up, and within a community of supportive organizations and individuals, to realize Malala’s vision of education for all girls.”

In a news conference on Monday, the Birmingham hospital’s medical director Dr. Dave Rosser said everything had gone “very well” in Saturday’s operation and said the teenager’s condition was continuing to improve.

He said: “She went back to the intensive care unit that evening, primarily as a precautionary measure rather than because of any major concerns and she’s now back on one of the wards in the hospital and doing very well.”

Consultant neurosurgeon Anwen White said she now did not expect Malala Yousafzai to have to undergo any further surgery.